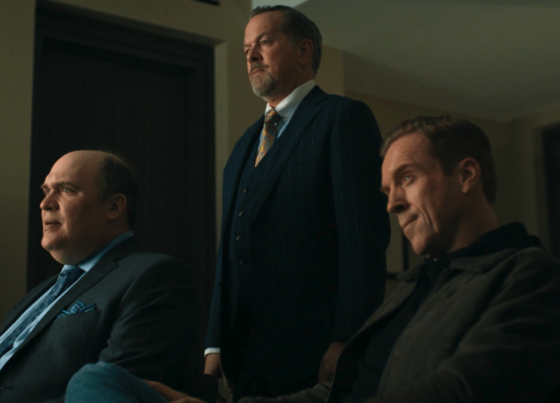 The “fathers and sons” theme is strong in this season of Billions, with “Contract” getting to the heart of why Axe bailed on dinner at his Yonkers childhood home last week — and Chuck being tasked with saving his father’s life. In both cases, the audience is asked to once again look at the humanity beneath the monster, and search for empathy. Billions revisits the watershed moment that set Axe on his path to wealth and power: His father’s abuse and subsequent abandonment when Axe was 12. As for Charles Senior, his brush with mortality — and the news that his wealth and status can’t override age and decades of hard drinking — has transformed him into a “scared shitless” child, begging his son to help him get a kidney transplant.

The long-term damage that Axe’s unnamed father caused is indisputable — we need no further proof than Damian Lewis’s voice cracking on a single line of dialogue when confronting his mother, Laurel (Patti D’Arbanville), over Papa Axelrod’s Yonkers reappearance. But while that explains much of Axe’s heartless actions through the years, does it excuse it? A similar question goes for Senior: Will Jeffrey DeMunn’s sublime hospital-bed acting be enough to win both Chuck and the audience over after Senior’s lifetime of abhorrent behavior? (I gotta say, those adorable pre-collapse scenes of DeMunn with baby Willow sure help — damn you, Billions!)

Before Senior is rushed to the hospital with renal failure in the episode’s final act, Chuck spends most of “Contract” preventing Axe from obtaining his bank charter, which he does in the most Billions way possible: The woman who stands between Axe and his bank is one Leah Calder (Wendie Malick!), who wants her son’s ex-fiancée to return the diamond ring that Leah’s father smuggled out of Hitler’s Germany. All Chuck needs to do is coax Bryan Connerty’s safecracker brother, Jackie (Michael Raymond-James), to get the ring out of the ex-fiancée’s apartment, and Bobby Axelrod will never own a bank in the state of New York. It doesn’t take much to get Jackie on board, considering Chuck offers him a pretty sweet deal: Bryan will be transferred to a closer, cushier prison, and Jackie won’t be arrested for grand theft auto (security cameras caught him casing a Bugatti showroom).

Before fulfilling his end of the bargain, though, Jackie has one reasonable request for the New York Attorney General. Chuck’s gotta pay an incarcerated Bryan a visit. He does so, with Toby Leonard Moore, in a wordless cameo, delivering a single punch to Paul Giamatti’s face.

While we’re on the subject of Wendy Rhoades, M.D. being a problem, let’s take a look at what’s going on over at Taylor Mason Carbon, formerly Taylor Mason Capital. Wendy and Taylor’s impact fund seems to be a success, but the friction I predicted last week is alive and well — it’s just not in the form of Bobby Axelrod. It’s Mase Cap employees Lauren, Mafee (who knows full well what it’s like to be Wendy’s mark), and Winston (Will Roland) who are suspicious of this partnership. They have a right to be worried, because the transition to an impact fund has resulted in the Mase Cap loyalists being pushed to the side while Wendy brings in hotshot new blood like analyst Rian (Eva Victor).

Even Lauren, whose career is on the rise this season thanks to Wendy, wonders aloud to Taylor if she’s a pawn in Wendy’s game to mess with them. Taylor, however, is (outwardly) willing to give Wendy the benefit of the doubt, offering her 40 percent ownership of Taylor Mason Carbon. Since Taylor knows the depths of Wendy’s shady tactics, I have to believe they know what’s up: “Do not get in the middle of this,” they tell a visibly concerned Lauren.

As for Axe, now he’s dealing with the bad optics of abandoning Savion and his mother for dinner — a local Yonkers reporter is gearing up to do a hit piece. Over a game of pool, Axe schools Savion on the concept of following local code: Don’t shoot your mouth off about what a terrible person Axe is, even if he did use you to get that opportunity zone, and especially if you’re going to accept that wad of $100 bills he’s laying down on the pool table. But as the episode progresses, we learn that there’s an underlying anguish to Axe’s decision to not go inside his old house at the end of last week’s episode. Savion mentions he’s used to Axe’s behavior, because it mirrors that of his own father, a guy who left the family when Savion was a child.

This layer develops further when Axe visits his mother in her Yonkers McMansion. He notices Laurel replaced her Lexus with a Honda. Laurel claims she sold the luxury car, but Hall gets the truth: Axe’s broke dad is back in town, and Laurel gave him her Lexus out of pity. Axe, who has made it his life’s mission to break the cycle of abuse perpetuated by his father, ironically allows his anger to turn him back into his old man, threatening to cut Laurel off if she ever interacts with her ex-husband again.

At least he can impart some wisdom onto Savion. In the end, the teen doesn’t talk to the hit-piece reporter, essentially killing the story. In gratitude, Axe purchases his old home, and finances a move for Savion and his mother to affluent Scarsdale. He also advises the teen to not let his dad back into his life when he inevitably returns looking for a handout, because he will now that they’re living debt-free in a tony New York suburb.

Being back in his childhood bedroom throws Axe for an emotional loop, so he summons Wendy for an emergency session. Once she arrives, we find out why Mike Prince’s strategic “You are Yonkers” comments were so triggering: Axe’s dad was abusive, and young Bobby spent his childhood protecting his mother. Going inside for that dinner would’ve brought those traumatic memories flooding back.

Having the Lexus crushed into a cube and deposited outside his dad’s place to the tune of Neil Young’s “Old Man” is only the start of what a guy like Axe’s father deserves. But considering he isn’t given a name or a face, perhaps that’s Billions way of saying that he’s not worth our time.