“All of God’s creatures like getting money for nothing and their chicks for free.” 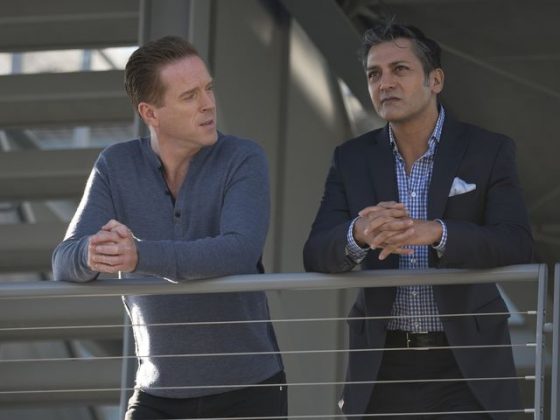 If you had told me a month ago that I would say, “Finally, an episode with more Ira in it,” I would have laughed at you. Ira has always been on the wrong end of Billions, whether he was getting manipulated by Chuck or condescended to by Chuck’s dad or left by his wife or being merely tolerated by nubile young women who care only about his wallet. So, seeing him get a chance to step into the spotlight and belt his own version of “Rose’s Turn” is unexpectedly welcome AND delightful.

Reader, I laughed so hard I wept as the sweat ran off Ira’s panicked face while his girlfriend allowed the waiter to luxuriously grate white truffles ($14 a gram) onto her pasta, each fat flake costing Chuck’s poor broke idiot ex-bestie more money he no longer has. His humiliation not yet complete, she politely brushes aside his attempt to (sort of) propose to her, making it clear that Ira’s gonna need to crawl his way back up a few rungs and bring her a ring worthy of her high-quality body and blonde hair before she’ll be on board.

It’s a big episode for “How much money does it take to be rich enough?” We see Ira, the would-be Mrs. Ira, Axe, Lara, and the unfortunate Michael run the numbers on their own personal calculations and come up wanting. Billions knows how ridiculous these conversations sound, so Lara prefaces her horror at the idea of being potentially left with only (gasp!) THREE HUNDRED MILLION DOLLARS after the government claws back the various majority of their joint assets with a “I know this sounds ridiculous, BUT…” Money is never just what these people need to fulfill their needs, or even their wants. It’s the amount of money they have compared to each other, in the never-ending social calculus of the one percent.

It’s Lara, too, who treats us to an inside look at the transactional nature of the super rich as they relate to their friends, and their employees who seem like friends. When one of her peers voices that she’s thinking about leaving her own wealthy husband, Lara is quick to strip away any illusions that her masseuse and her personal trainer and her private jeweler and her philanthropy buddies will have any interest in her company or friendship once she isn’t cutting them checks anymore. Lara wasn’t born into this world, and she knows how cold it is on the outside.

Back to Ira, he’s currently the prettiest girl at the dance. His embarrassing dinner was spied on by The New Halls (I am only open to calling them The New Halls), who see in him what Connerty will also see: an opening. Connerty wants him to help them nail Axe, and Axe wants him to drop the whole frigging mess onto Chuck in exchange for an earlier payoff and a fat rock for the missus.

There’s a fun subplot in which Wags and Taylor interview and reject a series of quants over at Axe Capital – complete with numerous failed attempts to build tables out of oddly-shaped pieces of cardboard – much to the horror of Mafee and his analyst buddies. It’s all in service of Taylor coming into their own, which is a joy to behold. Taylor has learned to pop off football and baseball metaphors when they’ll be of service, and make them sound casual. Where is the Mafee and Taylor buddy comedy for which the people clamor?

Meanwhile, Axe’s major financial play consists of matchmaking Raul Gomez, his old buddy in charge of the NYPD pension fund, and the aforementioned Michael, whose fund is on the rocks. (You can tell how much fun it is for him to be back in the game, however illicitly.) Axe will be signaling Michael’s plays, and Michael’s two and twenty – typical hedge fund fees – will be more like one and ten, with Axe and Raul splitting the other half. I’m surprised that Raul is getting his hands this dirty, but all of God’s creatures like getting money for nothing and their chicks for free.