“Great job of expanding the scope of the story of Billions, making this a show that’s not solely about Axe and Chuck’s feud.” 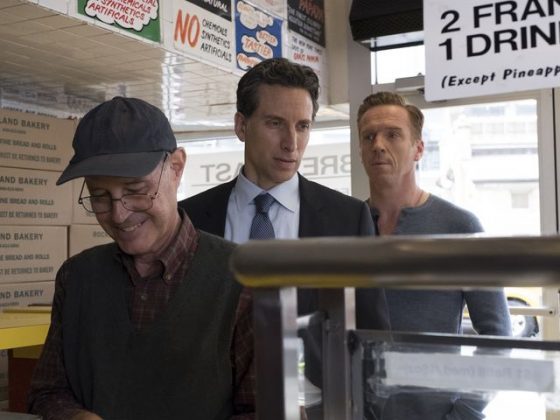 There’s a very distinct difference between the big players in the world of Billions and those who are just feigning at being big players. There’s a ton of money and influence flowing through the halls of both the hedge funds and the government, and money can only breed corruption and arrogance. Capitalism is competition, and where there’s money, there’s ruthlessness. The system is designed that way; it promotes the violence.

The difference between the big sharks and the minnows is evident in the opening scene of “A Generation Too Late.” Ira sits down for a dinner at a fancy, expensive restaurant with the woman he’s hoping to make his fiancée. He’d planned a proposal for this night, but after the Ice Juice crash and burn, he has no money to spend. He can’t give his far too young and beautiful fiancée the “wedding she deserves,” and he suggests they wait. She agrees all too quickly, all while adding more than $200 worth of white truffles to her pasta entrée. Ira’s face says everything it needs to. He’s not a big shark. He’s a minnow.

Wealth and money is obviously a huge part of Billions as a whole — I mean, the show’s title kind of gives it away — but “A Generation Too Late” is particularly interested in weaving stories about the way money shapes how these characters understand themselves. It’s been a theme from the start of the season, as Axe gave up his right to trade, and yet discovered that giving up doesn’t come easily to him. It’s not even because he’s driven; it’s because it’s been a long time since he’s known anything but immense wealth and power.

In last week’s episode, Axe managed to get an innocent woman deported because it’s what was best for him and his power. This week, after signing a separation agreement with Lara, he’s doing what he can to get that $2 billion moving. He’s shopping for outside help, and wooing his buddy Raul, the former cop who now holds a lot of sway over the board members for the police pension fund. He even tells his chef to recreate a specific burger that he shared with Raul, who continues to resist Axe’s ploys, in order to try and convince him that they should work together. Raul knows the law though, and he doesn’t want even a whiff of Axe (not the body spray) on him…for now.

One of the great things about “A Generation Too Late” is how everyone’s embroiled in financial and legal drama, and yet might not have to be if they could learn to live just a little differently. Wealth has corrupted their sense of what they need to truly live. Lara balks at the idea that she’ll only have $300 million to live on with the kids, and Axe agrees with her. He thinks it’s unacceptable. That’s not their “lifestyle.” Similarly, Axe tries to coerce Michael (Hari Dhillon, returning for a more substantial arc) to secretly and illegally manage his $2 billion by leveraging the man’s failing business. He shows him how he can’t possibly live on the $40 million he’ll end up with, so Michael agrees to get on board.

Back at Axe Capital, the pursuit of money is taking a different turn, as Taylor, along with Wags, is interviewing “quants” for the company. Essentially, a quant is a “quantitative analyst,” someone who will bring an algorithm to Axe Capital that’s means to mimic what real people can do, but much, much faster. Wags and the staff are livid that this is happening, seeing it as a threat to their jobs. Taylor isn’t giving in though. They believe they have to explore every way to make money, and Axe agrees.

The scenes where Taylor and Wags interview their candidates are some of the best of the episode. They’re funny and mysterious because we don’t really know what Taylor is looking for. Plus, Asia Kate Dillon and David Costabile have great chemistry as Taylor and Wags, the contrast of their personalities endlessly entertaining. Eventually, after they seemingly stumble upon a great hire who used to work at NASA and Taylor refuses to hire him, we learn that Wags had the guy build a back door into the algorithm that would essentially make all the employees look good. Taylor’s not mad, really, but rather sees an opportunity: They’ll build their own algorithm instead.

For an episode that doesn’t really move along the season’s larger story in a substantial way, “A Generation Too Late” sure is a busy episode. There’s a lot going on. Most significantly, Dake and Brian take yet another hit to their case against Bobby Axelrod. Axe once again makes a big move behind closed doors. He goes to Ira, who’s weak after realizing that his fiancée won’t marry him without he promise of a lot of money down the road, and offers him a deal. Axe will pay him $30 million for his worthless Ice Juice shares and throw in an expensive engagement ring on top of that, all in exchange for not testifying in the case and not pursuing any civil suit later on. In essence, he offers up guaranteed money now, rather than the promise of a lot more money later. Ira can’t resist, and that leaves Dake and Brian drifting yet again.

Brian, in particular, is a mess, and he’s starting to see that Chuck’s made some shady, secretive moves that he’d disagree with. After a drunken confrontation with the Burke brothers, Brian goes home and pins a picture of Chuck and his father to his whiteboard, like a detective putting another suspect into play. He says he “can’t look away” anymore, that Chuck and his father are involved in all of this in one way or another.

In other words, Chuck is feeling the pressure from both inside and outside his office. There’s the revelation from Brian, sure, but there’s also the fact that the attorney general isn’t letting up on his directives for Chuck’s office. He’s already mentioned dropping a lot of the white-collar criminal cases in the name of the free market, and now he’s asking Chuck to prosecute a prisoner who killed a guard. The problem? The prisoner is innocent, as he was beaten day in and day out by the guard. Brian insists that this is exactly the type of vulnerable person they’re supposed to be protecting.