“The kind of complex, taut high-wire act that Billions pulls off with regularity” 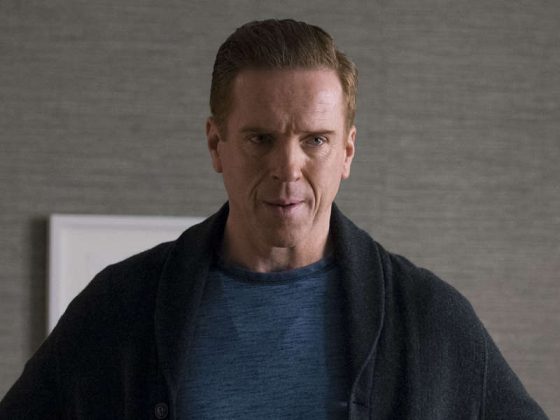 At the very beginning of “The Third Ortolan,” Axe and Wags are seated at a fancy dinner table, their heads covered by cloth napkins, wine flanking their empty place settings. We don’t know it yet, but they’re seated for a French delicacy that’s, well, not looked all that kindly upon in France or the world over. The practice of catching and preparing an Ortolan, a small bird, is no longer allowed. It’s a cruel process indeed. The bird is caught, kept in a cage in a state of “artificial night,” which tricks the bird into gorging themselves on grain. Once they’ve doubled their bulk, they’re drowned in brandy, roasted, plucked, and then consumed whole, bones and all.

It’s a fitting start to the episode, and a fitting ritual for the people of Billions. Axe, Wags, Ari, Dollar Bill, Chuck…they’re all gorging themselves until they’re drowned by their masters. They thrive during rituals of cruelty. They think they control their world, and to an extent they do, but there’s always a cage just waiting to be filled. The cage is no metaphor; it becomes literal in “The Third Ortolan.” Chuck, Axe, and Wendy find themselves threatened with very real jail time. “What happened?” sighs Axe to Wags after they’ve eaten three Ortolans, proving again that they don’t know when to stop. “You fought the law, and the law won. I’ll miss you,” says Wags, as sincere as he’s ever been.

“The Third Ortolan” is a mesmerizing experience, the best episode of the season, and the one that kicks a lot of the simmering storylines into high gear. The writing is incredibly tight, even when compared to the high standard Billions sets, to the point that there’s little room to breathe in each scene. From the very first moment the episode puts the pedal to the floor and takes off, recklessly but confidently. The structure is familiar, almost procedural in nature. There’s evidence, the search for it, two competing teams of lawyers, and a whole lot of collateral damage. And yet, Billions makes it feel fresh, urgent, and raw.

Perhaps that’s because Wendy, likely the most relatable character on the show, is caught in the crossfire. She’s always tried to act as the mediator for Chuck and Axe, even if they didn’t know it, but all that’s got her is an impending prison sentence. We’ll get to that in due time, but there’s lots to cover. “The Third Ortolan” is the episode where all the walls start closing in. An impending trial will do that. Everyone is scrambling, and it makes for a truly exciting episode.

Essentially, the episode tests everyone’s loyalty, and their ability to bluff. It’s the day of the dismissal hearing for the Ice Juice case. Orrin is feeling confident that his team’s ability to make certain key witnesses disappear or flip has ruined Connerty and Dake’s case, but Axe isn’t counting his chickens before they hatch, even if Dollar Bill already has the bubbly on ice. “I’m right. I feel it in my gnads,” he says about the success of the dismissal, because every emotion Dollar Bill has can only be expressed in groin-related terms.

The episode checks in with each team as they get ready to present their case. Orrin believes Dake and Connerty have nothing on Axe. Dake gives Connerty a pep talk about just that, saying he needs to go in there with confidence and no signs of weakness. In short: Connerty fails miserably. While Judge DeGiulio channels Funkadelic in one of the episode’s myriad of great scenes, Dake sees the case falling apart before his eyes. It’s not over yet, though, as DeGiulio gives the team one week to produce evidence that would warrant the case going to trial. Orrin sees it as a win. Axe sees it as more time he has to spend worrying. Connerty sees nothing but an impossible task ahead of him.

Things really pick up when Ari Spyros goes off on his own. His confidence has been building all season. He sees himself as one of the big boys. He’s the little kid following all the cool kids around, mimicking their actions and words in a desperate plea for approval. So, when he does some digging on Wendy’s short of Ice Juice, enough to incriminate her as a co-conspirator with Chuck, he thinks he’s earned access to the club.

What he fails to assess, though, is Axe’s unwavering loyalty to Wendy. “She’s this company’s fu–ing spirit animal,” he says, ripping into Ari for his foolish venture. There’s no taking it back, though. Rather than check with Axe first, Ari just went ahead and handed over all the evidence to Connerty. “I went full Le Carre,” he says before the episode cuts to a silent nighttime meeting where Ari, full of bravado, hands over the file folder of evidence. He’s no perfect spy, even when meeting out in the cold. Ari’s been playing a role for weeks now, and this is where it finally catches up with him. He’s a fraud, play-acting his way in this world of cutthroat people.

Wendy getting pulled into this mess, and the one-week deadline from DeGiulio, shifts Chuck’s whole plan. He thought he had plenty of time to get the slide planted in Axe’s house, but when the judge gives the case that deadline, Chuck’s hired hand backs out. Now, he’s scrambling just as much as Axe, and Wendy is the collateral damage. In a stirring sequence, we see Axe break the bad news to her. It’s a stirring scene because we understand the weight of this moment. For all of his terrible qualities, Axe truly cares about Wendy. They share something special, and it breaks his heart to tell her that she could be facing prison time.

Axe even goes so far as to contemplate taking a plea deal in order to save Wendy, but he’s quickly talked out of that by Orrin and Lara. Once Axe realizes what prison time will do to his relationship with his kids, he can’t stomach the idea of taking a plea deal. Lara threatens to move to California to escape the stink that would come with his prison time, all in the hopes of saving the boys from public embarrassment. That’s too much to sacrifice, and yet, Axe doesn’t have any other options.

Taylor knows Axe doesn’t have too many options. While Dollar Bill is preemptively celebrating, Taylor is thinking about what Axe Capital looks like without its leader. Wendy cuts right to the core of their feelings in a one-on-one meeting, saying that Taylor is scared of becoming the leader, and yet also relishing the opportunity. It’s why they’re so focused on perfecting their algorithm. If Taylor can do that, they’ve made their mark. Taylor already has a support system in place now that they’ve hit it off with Oliver. All that’s left is creating that algorithm and moving Axe Capital in a new direction.

It’s not only Axe who’s run out of options, though. Chuck doesn’t have too many himself. He tries to meet with Connerty over lunch, but his former protégé rebukes all of his advances, telling him that he’ll come by his place later in the evening to discuss what needs to be discussed. It’s the most assured Bryan has been in some time, perhaps because he feels betrayed by Chuck. The man was his mentor for so long, and his insidious side has been revealed, a delicate truth that he simply can’t handle.

Dimly lit and all atmosphere, the scene where Connerty meets with Wendy and Chuck is one defined by tension. Connerty knows he has all the leverage in the world, and he’s not giving up anything. He tells the couple that their only option right now is to enter separate pleas and testify against Axe Capital, which would put Chuck in prison and allow Wendy to stay with the kids. She’d likely lose her medical license, but Connerty sees that as a best case scenario considering that prison is the only other thing in her future.

Of course, Chuck, Axe, and Wendy won’t accept any of this. The cages are for the Ortolans, not for them. Thus, Wendy devises a plan. She and Chuck will meet with Axe under the guise of figuring out how they can all stay out of jail, when in reality this will allow Chuck time to plant the incriminating slide in Axe’s penthouse suite. It’s clear that Wendy doesn’t want to betray Axe like this, but she sees no other option.