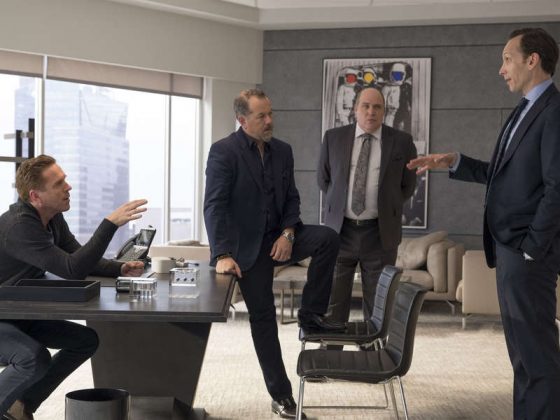 Are we all partially recovered from last week’s episode? I’m not, but they’re paying me to do this so I have to soldier on. I had thought we’d get a chance to draw a breath, but that turned out to be a bit of a pipe dream. Right up until the last shot of this episode, things had the ability to fork in two – at least two! – very different directions.

I regret to inform you that Dollar Bill and Spyros have had whatever kind of debriefing from Porschegate they’re gonna have, off-screen. Weirdly, it seems to have cleared the air a touch? Spyros, you see, is a COMPANY MAN now – it’s extraordinary how seriously he took the idea of being Family – so he’s not going to let a tiny thing like having his sports car turned into a brick right in front of his eyes zap his enthusiasm for Axe Capital.

It’s that exact newfound enthusiasm which leads to the main disaster of the night: Spyros “helpfully” handing Bryan Connerty the deets on Wendy’s utterly benign, last-minute Ice Juice short, which – although simply an attempt to help her husband recoup some of his losses – leaves her holding the bag and appearing for all the world like a conspirator in her husband’s play. Watching Axe and Chuck realize that their nonsensical, shit-stirring, dick-measuring feud has finally sloshed (possibly irreparably) onto the woman they both care for is oddly sweet. Axe, to his credit, immediately begins investigating the possibility of taking a plea – you can IMAGINE the look on Bach’s face as his boss considers throwing himself on the grenade for a woman he isn’t even sleeping with – and comes within a thread of doing so. Chuck, because he’s the worst, honestly doesn’t even come close to Axe on this one, and remains as committed to not going to jail as humanly possible. I mean, I GET IT, but how many lives are you going to stomp on on your path to the governorship?

Black Jack Foley is becoming more and more interesting as the show progresses, having gone from a powerful fixer in state politics to a significant mentor in Chuck’s life. Sure, Chuck hasn’t been light on Strong Father Figures, but in Foley he’s found someone who takes him a little more seriously as a player in his own right. Charles Sr., for all the chutzpah of cheerfully lying his face off to Dake and Connerty to protect his son, will always see Chuck as his own dreams personified, tallying his failures and triumphs as though they were his own. Black Jack actually sees Chuck as his own person, and believes that he has what it takes to rule from Albany (under his watchful eye, obviously).

Black Jack’s advice, too, is excellent: I was thrilled that it was Wendy, with her keen ability to read people, who recognized that the impossible situation she found herself in was something to bring directly to him. His advice to “break the stick” leads to this week’s most significant set-piece, bringing Chuck and Axe to the literal table at Axe’s penthouse to see what, if anything, could be done to save all three of them from Connerty’s mission of righteousness.

Now, what Chuck brings to said table, after a great deal of hemming, hawing, and failed attempts to hire mercenaries to plant it at the penthouse ahead of a search, is the slide he got from Dr. Gilbert. There’s definitely some TV Magic happening with that slide; we’re told repeatedly that it just can’t be out of the fridge longer than 18 hours, but I’m pretty sure if it’s out and living in someone’s coat pocket for ten hours before getting popped back in there, the clock doesn’t START back at 18 hours when next it comes out! That slide is more symbolic than scientific at this stage of the game: Certainly, to Chuck, it represents his last, best chance to escort Axe into a cell, and as he sweatily creeps around the penthouse wondering where it can be safely stashed, the sheer ridiculousness of his position and his actions becomes clear. When he returns and puts the slide on the table, Axe and Wendy know that Chuck is putting his whole ass on the line in the interests of saving Wendy from prison. Whatever comes out of this meeting, neither of those two can doubt Chuck’s commitment to resolving the situation.

And with all of [waves vaguely] THE PLOT out of the way, Billionstreats us to two very beautiful examples of how people caretake for each other in times of stress and difficulty. The first, of course, is Wags using his weird gourmet obsession to do the most spectacular thing for Axe he could possibly imagine: a gift of illegally sourced and prepared ortolans. (Obviously, if you think you’re going to jail, you want to eat a tiny songbird, bones, beaks and all.) Axe, of course, is a cheesesteak man, and his interest in eating an illegal songbird while wearing a napkin over his head (to shield their culpability from God’s eyes! Food people are so extra) is minimal at BEST, but he knows that this is Wags loving him the best he knows how. It’s an act of love to crunch that songbird, and Axe is going to rise to the occasion.