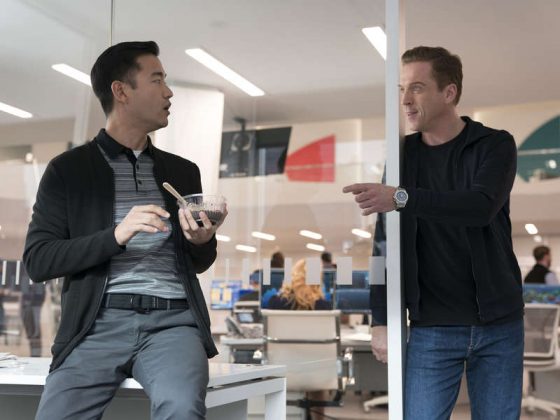 Not You, Mr. Dake

When, at the end of last week’s episode, Wendy, Axe, and Chuck sat down to be fully transparent with one another, they did so with a purpose. Each of them had been implicated in the Ice Juice sabotage in one way or another, and each of them was facing jail time. Axe and Chuck had always been in trouble, but Wendy was only recently a target after Ari started working above his pay grade, finding out that she executed a short on Ice Juice shortly before the sabotage.

At the top of “Not You, Mr. Dake,” Chuck and Axe still sit at the table, discussing how keeping Wendy safe is their first priority. When she leaves to get a glass of water, the two converse in hushed tones, pondering whether their damsel in distress will be willing to throw someone under the bus to save herself. Both men don’t think so, knowing Wendy to be no-nonsense, but also honorable. Then, she comes back to the table with a firm answer for them: “So, who’s going to be our patsy?”

It’s clear early on that the fall guy is going to be Dr. Gilbert, the man who Chuck recently convinced to hand over the incriminating slide that would act as evidence against Axe in court. Chuck assures Gilbert that the slide is being planted in Axe’s house as they speak early in the morning, but we all know it’s not true. Chuck rambles on about paratroopers and the “point of no return,” as if this is Gilbert’s big moment to step up and take down Axe, when really it’s a point of no return for him, Wendy, and Axe.

From there, “Not You, Mr. Dake” essentially tells two intertweaving stories, both meant to showcase how Axe, Wendy, and Chuck manage to derail the case of the Ice Juice sabotage both by pinning evidence on Gilbert and using strategic manipulation to get important people to play their game. The episode takes a storytelling approach familiar to Billions, which involves jumping around in time, using the disjointed narrative as a way to create tension and unpredictability. It’s an approach that works really well most of the time, and yet feels unnecessarily convoluted here.

As the plot unfolds, the endgame becomes pretty clear. Chuck plants the slide in Gilbert’s house, underneath a bottle of ketchup in his fridge, and that leads to the FBI bringing him to Chuck for questioning. Chuck talks about issues of guilt and how even facts are tricky things in court. Gilbert plays tough for awhile, demanding a lawyer and saying he’s done nothing wrong, but at this point we, along with Chuck, know how this all ends, and quite frankly, that makes getting there a little less exciting.

That’s not always the case with Billions, but I think last week’s breathtaking episode makes “Not You, Mr. Dake” suffer by contrast. The overly convoluted nature of the structure doesn’t seem necessary this time around. What Chuck, Wendy, and Axe are pulling off isn’t nearly as complicated or compelling as last week’s events, and that means that the episode struggles to really build any momentum. This is still a fine episode of Billions, and one that necessarily pushes Chuck, Axe, and Wendy into new places that will certainly pay off down the road, but there’s a loss of immediacy and urgency within the storytelling itself.

There are certainly plenty of intriguing moments in the early going though. The most fascinating of all of them is the reemergence of a character that’s been MIA for some time: Hall. Axe finds him seaside in Nova Scotia, looking like a stand-in for Bill Murray in The Life Aquatic with Steve Zissou, and asks him to “suit up” and come back to help him with a little blackmailing. Nobody does that like Hall.

The lone problem Axe needs to take care of is the fact that Connerty has access to Wendy’s cell phone carrier, which proves that she was at Axe Capital and then the Southern District when she made her short, implicating her as a co-conspirator with Chuck. Axe’s guys can’t hack the carrier’s system, and that’s where Hall comes in.

Hall finds one of the carrier’s employees at a hotel, and sits quietly at the end of his bed until he wakes up. He tells the employee what he knows: that he took the account information of a few celebrities and politicians and sold it to the tabloids for a fee, a federal crime that could land him in prison…unless he does what Hall wants, which is fabricating Wendy’s records. A simple keystroke, as Hall puts it, and suddenly it looks like Wendy will be off the hook.

As Connerty presents his evidence to the judge, signaling that he has ample proof that Wendy was a co-conspirator, and that this whole sabotage is bigger than he could have imagined, the Axe Capital team meets to brainstorm a way to get around the evidence. It’s in this moment that Wendy truly steps over a line that she never has before. Axe thinks Mafee is just gullible enough to be used as a pawn in their game, but he doesn’t have an angle with him.

That’s where Wendy comes in, realizing that she can use Mafee’s romantic feelings toward her. She goes to his apartment, suggestively rubs his knee and lays her head on his shoulder, all while pouting about how she’s this innocent person who could be going to jail for a simple mistake. She manipulates Mafee into saying he called Wendy about Ice Juice, and coupled with the fabricated phone records it’s potentially enough to get the case dismissed.

Sure enough, after Connerty has actually secured a trial against Axe, he gets the new information, the fabricated information. That forces him into a recess, and when he returns after meeting with Chuck, Dake, and the Attorney General, he has no choice but to throw his case out. Chuck’s grin during the meeting says it all; it’s everything he’s wanted. Bryan has to drop the case, Dake gets fired in the meantime, and Chuck suggests prosecuting Gilbert just so that Southern can have something to show after all of this.