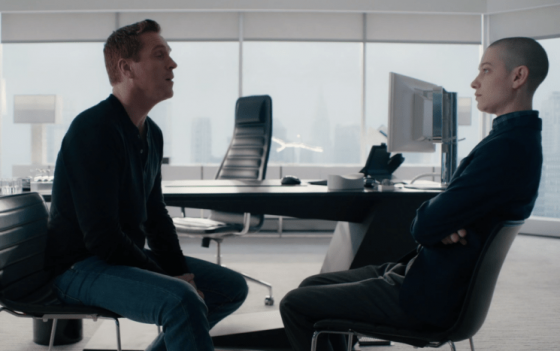 Good episode, teammates! A really good one! You’ll remember that I felt the writing has been a bit shaky recently: notes not hitting right, characters behaving out of character just to move the necessary plot points, etc. Well, I shouldn’t have doubted, because Billions just geared up with a roar for these last few episodes of the season. I’m impressed, I’m happy; let’s get into it.

I knew that we were going somewhere the minute I saw Sacker getting noticeably flushed while watching Salt Bae work his Turkish steak magic. Sacker doesn’t really get a chance to shine in this episode, so I’m glad she had some fun at dinner. When is Sacker going to get a worthy romantic plotline? I don’t want to return to the lovesick vibe she gave off in season one, but I would dearly love to see her go toe-to-toe with a man on her level (should such a man exist.)

The three main plot threads driving the action of “Kompenso” are as follows: Chuck bailing Ira out of his rocky marital interlude, Chuck finally figuring out exactly how he’s going to get the jump on Jock Jeffcoat, and Comp Day at Axe Cap. Let’s work through ‘em in order.

You KNOW I told Ira not to marry this dame! Taiga is so obviously bad news. Too young, too beautiful, too transparently out to get paid. Ira has always seemed to know the score with her, but when Chuck gets Pete Decker to poke around under the hood of her “business,” there were still a few surprises. She’s got a boyfriend (SNL’s own Alex Moffat, which now that I’ve had time to process it, is genius casting) and she’s siphoning money out of Ira’s accounts like the Cossacks are coming and she needs to sew jewels in her clothes. Ira, bless his HEART, has no plan. No plan! The inhale of breath I took when he told Chuck that he married THAT WOMAN without a prenup in NEW YORK STATE. Sir, you are an attorney!

Well, he does have a plan, I guess: wait for her to come back to him. You know how much sexy young go-getting women love men who patiently accept being stomped on. Happily for Ira, Chuck’s residual Ice Juice guilt is such that he’s more than happy to put the squeeze on both Taiga and her preppy handbook boyfriend. It’s a pretty normal play for Chuck (I did enjoy the meditation on “don’t make a federal case out of it”) but the real humor came courtesy of good ol’ Chuck Senior, piloting in to drop some Marriage Wisdom on Taiga. Classic stuff, Charles! Teach Ira how to fuck you right, don’t bring home any diseases, toss out your birth control immediately, and find a worse couple than you to make fun of together. No wonder Charles and his wife continue soldiering on, despite his belief that monogamy is a form of socialism. Taiga signs a post-nup and brings the money home to Ira. It’s Ira’s observation that sometimes when the worst thing you can imagine happens it turns out to not be so bad that gives Chuck that little glint in his eye that signals he’s found his move.

What does Chuck fear above all else? That Jeffcoat will find out that Chuck’s coming after him. When Chuck sits down with the New York State Attorney General to hand him the fragile, mostly useless case against Jock, he stares at him quizzically until Chuck clarifies: The play is not discovering whatever bullshit Jock and his brother have been up to with their cable networks, the play is charting Jock’s obstruction of justice when he finds out that there’s a case in progress against him. Good move, Chuck! There have been some boneheaded maneuvers out of you recently, it’s nice to see you get back in fighting shape.

Over at Axe Cap, of course, EVERYONE is in fighting shape (or nervously puking shape) for Comp Day, the annual distribution of bonuses to Axe’s underlings (with the notable exception of Spyros, who is lucky just to see another day). Axe is always resentful about having to pay people (the super-rich are the cheapest people in the world), and adding to his usual cheap-skatery is the fact that prior to the raise happening, he’s paying his people…

… out of his own (extremely deep!) pockets. The horror! And this year he’s doing it without Lara. The revelation that Lara always helped him come to the right comp decisions is kind of sweet, she’s tough as nails but also has a pretty good sense for people. Wendy, knowing this, and seeing that Axe is on the edge of losing Taylor over his own pigheadedness, convinces Lara she needs to go provide her services at least one more time, even if it’s just for her own financial best interests as Axe Cap’s largest investor.