“Over the course of four seasons, the Showtime series has shown a rare capacity to evolve, pivoting, niftily, like a company under S.E.C. investigation.” 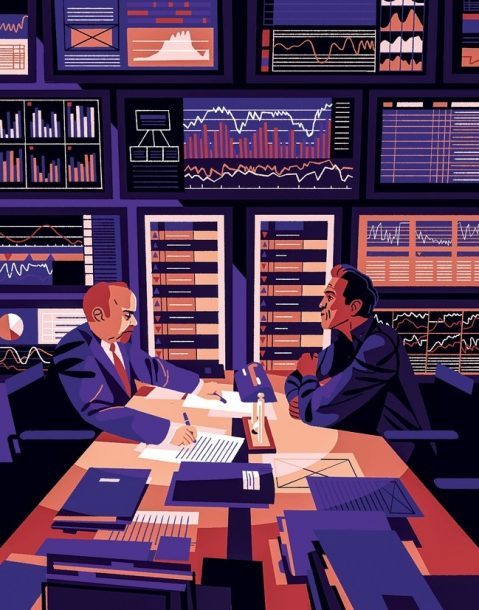 Showtime’s “Billions,” a late-night snack of an antihero drama, set among finance weasels in New York and Connecticut, is the rare series that the term “guilty pleasure” suits nicely. The show has barbed dialogue and a blind-item documentary interest in the lives of the ultra-wealthy, but at heart it’s a pleasingly amoral caper series, a Wall Street fever dream, scored to ironic pop songs—more pulp than grit, with a streak of camp. Last week, in the San Francisco Chronicle, the critic Allie Pape called the show “prestige trash,” which pretty much nails the tone: it’s dirty fun, without the self-seriousness that drags down so many of its cable-drama peers.

Over the course of four seasons, “Billions,” which was created by Brian Koppelman, David Levien, and Andrew Ross Sorkin, has also shown a rare capacity to evolve, pivoting, niftily, like a company under S.E.C. investigation. The first season set a simple formula, a Coyote-versus-Road Runner duel between two styles of male ambition: in one corner, the alpha hedge-funder Bobby (Axe) Axelrod (Damian Lewis), using his saintly post-9/11 reputation as a cover for insider trading; in the other, Chuck Rhoades, the politically ambitious prosecutor (played with high dudgeon by Paul Giamatti), a resentful beta who is eager to send Axe to jail. Rhoades is the Ivy-educated son of a blue blood, while Axe has clawed his way up from nothing, a.k.a. Yonkers. There is plenty of kinky sex, too, with Maggie Siff as Wendy Rhoades, a therapist, who—ridiculously but entertainingly—is both Chuck’s wife/dominatrix and Axe’s employee, guru, and maybe soul mate. It all felt very Showtime: gimmicky and lurid, but also witty and well paced, and good at making Wall Street transactions comprehensible to English majors.

The show’s signature attraction is Axe, a fit, hyper-strategic market genius who has glimmers of conscience but at one point barks, “I’m not human. I am a machine. I’m a fucking Terminator.” His need for control is what we identify with and get off on. It’s much harder to fantasize about being Chuck, a sharply drawn and performed but more earthbound character, even when he begins to break bad: he’s too grumpy, too tormented, to be our avatar. Axe, in contrast, is a vision of pure meritocratic transcendence, of being so good at your job that the world just lets you do it, no matter whom you hurt. That’s what distinguishes “Billions” from HBO’s “Succession,” another darkly funny series about Manhattan élites, but one with a more subversive theme: its characters are fools, entitled dummies deluded about their own potential. If “Succession” is a show about Jared Kushner, “Billions” is the show that Kushner would write about himself.

There’s a place on television for cathartic fantasies, of course. But there was always a risk of getting stuck in a formula: how many times could we watch Axe beat Chuck, then vice versa, ad infinitum? And so, in the aftermath of the first season, the show began, smartly, to expand its breadth, folding in grizzled character actors, from Eric Bogosian to David Strathairn, along with a diverse range of C.E.O.s, venture capitalists, quants, fixers, and shady lawyers—a veritable Westeros of compromised players. The showrunners game-tested these figures, shifting the strongest to the center—flexing the structural adaptability that is the mark of serialized TV. By the third season, a new player was on the rise, and my colleague Helen Rosner praised “Billions” as “one of the most sneakily progressive and feminist hours” around. I wouldn’t go quite that far—it isn’t “The Good Fight”—but she has a point: the show has begun to explore an alternative vision of heroism, one that is gentler, stranger, and, in its way, almost idealistic. And where better to tweak bro culture than from inside the locker room?

That new figure is the ultra-rational poker genius Taylor, a shaved-headed, Tai Chi-practicing, nonbinary tech-savvy millennial, a former member of Occupy Wall Street who uses the pronouns “they” and “their” and speaks in a dry-humored monotone. As the fourth season opens, Chuck has been fired, Axe outsmarted. They’re paralyzed men, forced into an alliance. Taylor has become the show’s knightly quasi-protagonist, displacing the class war with a generational one.

In last season’s finale, Taylor betrayed their mentor, Axe, by founding a new firm, Taylor Mason Capital, with stolen clients and staff. “There are things they were comfortable with at Axe Capital that we will never do,” Taylor tells prospective hires. While Taylor’s rivals are prone to literary quotes (Chuck) or sports analogies (Axe), Taylor goes the nerd route when reaching for a metaphor: “They turned us all into Starship Troopers, sent us to Klendathu and some of us got our brains eaten. And it wasn’t until the end of our time in that we realized we were the bad guys all along. It’s not like that here.”

Maybe, maybe not: Taylor’s new enterprise is possible only because of a strategic partnership with a Russian oligarch, a murderous billionaire played with relish (and mustard, ketchup, and A.1. sauce) by John Malkovich. “I had to pick it up by watching the ‘Happy Days’ and Mike Wallace,” Malkovich’s character says about learning English, rolling his “r”s like dice. “Though my favorite was ‘Rrrollerball.’ The original.”

Taylor is played by Asia Kate Dillon, an actor who, like Taylor, identifies as nonbinary and goes by “they.” Their monastic charisma radiates a different sort of physical exceptionality from Axe’s—a canny disruption of the show’s gender dynamics. Before Taylor arrived, Axe was the default role model, the jock to Chuck’s cuck. He was the route to existential freedom—something the show itself knew was a scarce commodity, available only to those who can afford it. “Everybody’s a libertarian until it’s their own town that’s dying,” Bogosian’s C.E.O. character noted, as Axe Capital conspired to drain a depressed city of its funds.

Now Taylor seems like the liberated one, their presence causing Axe to appear more villainous. Taylor’s quietness makes their opponents look loud; their watchfulness makes other people—especially men, shouting about power—look frenetic; their ideological cocksureness makes the older men look weak. Bone-thin, dressed in trim gray vests, with a freckled, meditative air, Taylor has a neutrality that highlights the other characters’ specificity—masculinity becomes exotic, from the chest-thumping bloviations of the Axe Cap salesman Dollar Bill to the mustache-twirling decadence of Axe’s lieutenant, Wags, and the sweet decency of Mafee, Taylor’s new partner.

Read the rest of the original article at The New Yorker