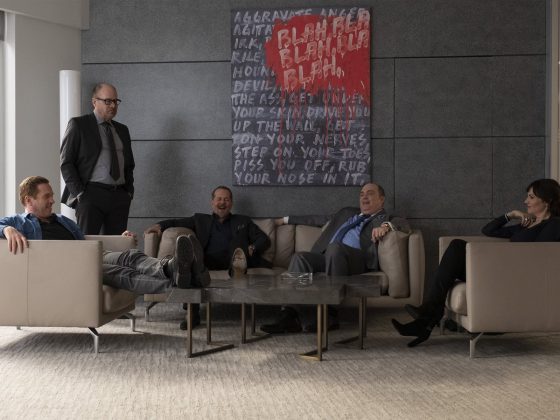 Now all my days, are filled with tears
Wish I could go back and change these years
I’m going through changes
Changes – Black Sabbath

Welcome back to the Trader’s Desk. This was my favorite episode so far this season. No “fin-speak”, but oh man, the emotions! Wendy is all sorts of lost in this episode. In my last two posts, I wrote about the anger and trust issues Wendy is having that have lead to this point. In “Infinite Game” it all comes to a head.

On a housekeeping note, there will be no Trader’s Desk next week (5/10). Lady Trader has earned a much needed vacation, so I will not be recapping; but if there is financial jargon in Ep. 8 that needs clarification, you can always reach out on Twitter: @lisaglick926.

This week we saw some of our favorite characters going through emotional changes: one was a surprise (Axe), one we could see coming (Taylor), and one could be the most profound of them all (Wendy).

Axe and his crew – Wags, Wendy and Rebecca – are meeting at his “club house”, Bruno’s. What better way to discuss destroying someone than over a pizza? Axe doesn’t want anyone to see Rebecca coming in and out of Axe Cap, but hasn’t that bird flown the coop? She’s been to the office several times, and even knows where the ice is!

Axe is letting Rebecca in on his plan to take down Taylor. Axe tells her he is bringing her in to the plan because it has upside for her, but we all know that is just a bonus. He’d tell her that even if it weren’t true so he could use her. But, I think Axe knows Rebecca is as smart as a whip, and there is only so much bull he’d get past her – she’d smell it a mile away! 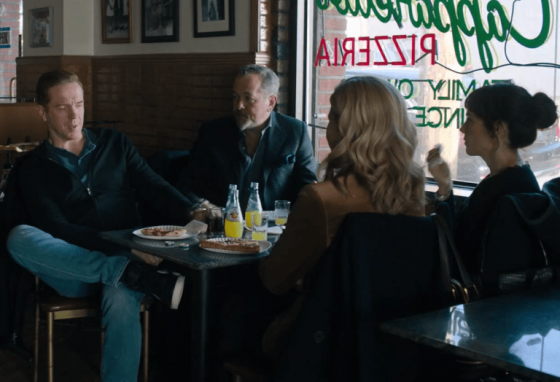 Axe does tell Rebecca the developer of the tech is Doug Mason – Taylor’s dad. Rebecca asks the right question: is this a good deal money-wise or just make Taylor’s head explode? I think Axe lies – “A bit of both”; this is all about revenge for Axe, nothing more. Axe needs Rebecca to invest in the project, gain control, and then he will buy it from her at “a healthy profit”. I’m surprised Rebecca goes along with this. She already gets a whiff that there is a revenge factor here; as a smart businesswoman, she’d know that emotions should be on the sidelines.

At TMC, Brian Dana is letting Taylor, Doug and Sara know of new interest in the project in the form of Rebecca Cantu. She’ll invest $100M and ramp up the timetable on production. This is music to Doug’s ears, but Taylor is there to ask the logical, real questions: What kind of control will they still have? How much say will they have in terms of development, personnel, etc.? Taylor is looking at this proposal from a business perspective, which is exactly how they should. Doug is emotional about it, because this is his “baby”’. Taylor does not like what they hear – all these issues will be determined after they close the deal. Sara needs a moment with the boss. This deal would make financial sense for TMC with the possibility of a 38% profit and Doug walking away with $5M. It’s the walking away part Taylor has an issue with. Taylor is not just in this for the money, but to help make Doug’s dream happen. It’s their way of trying to repair and build on their relationship with Doug. Taylor knows what needs to be done – turn down the deal. Keeping Doug on this project is Taylor’s “highest priority”. Taylor is making the emotional choice. We have seen how much Taylor wants (and needs) the love and approval of their Dad. 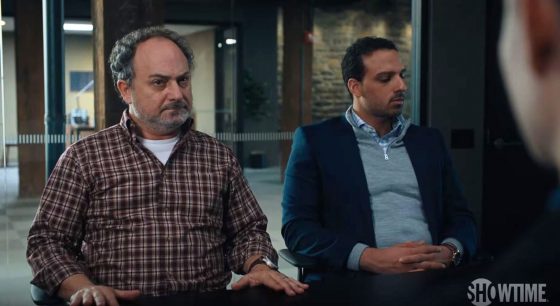 Axe’s crew is back at the pizzeria because Rebecca needs to tell them that Taylor passed on the deal. Everyone seems surprised (it’s something Axe would never do – make someone else a priority!). Wendy knows Taylor will be under pressure to live up to the perfect vision they are trying to be to their dad, and that is the weak spot. Wendy doesn’t blink an eye when Axe asks her to accelerate the process of destroying Taylor. “How far do you need me to push this?” There is no such thing as a limit with Axe, so it’s all the way!

In the past, Wendy used her skills to help people become the best they could be; now she’s reduced to exploiting that skill to crush not only Taylor, but Doug as well.

As his minions go off to set their plan in motion, Bruno asks for a word with Axe. Someone has offered to buy Bruno’s business for $1M. This is perfect for Bruno – he has been looking to buy a place in Florida and the sale of the pizzeria would help him do just that. Axe doesn’t get or doesn’t want to get what Bruno is saying because it’s not what he wants. Axe goes into business mode – they’ll open the business down there! No can do – different water, different crust. No problem, Axe will have NY water flown down. Bruno just wants to retire and spend time on a beach instead of in front of a hot oven all day; take it easy, and relax after years of long hours running the restaurant. Axe is not even listening. He wants things the way he wants them, so he starts to dictate terms: Axe will give Bruno the funds for his Florida home, but Bruno will have to train someone to replace him at the pizza shop. Axe is generous enough to let Bruno spend the winters in Florida then come back and make pizzas for Axe for another 5 years! We can see on Bruno’s face this is not what he wants, but what does that matter to Axe? His wants and needs outweigh everything.

Bruno reluctantly agrees but Rebecca can see that this picture is all wrong. She is seeing firsthand the steamroller that is Bobby Axelrod – not just against an “enemy” like Taylor, but even to a friend like Bruno. 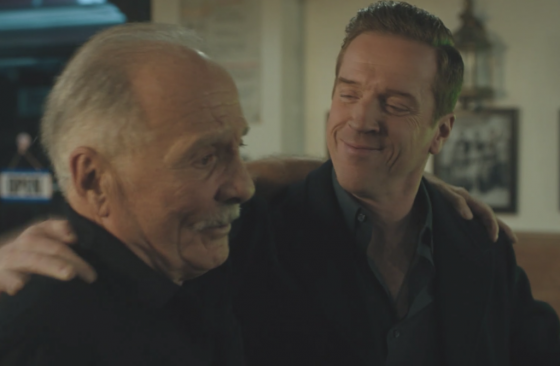 While on a break from manipulating Taylor, Wendy feels she needs a change. The family townhouse no longer feels much like a home to her, so she’s investigating putting it up for sale. This all comes as news to Chuck. This prompts Chuck to tell Wendy a horrifying story from his childhood, in an attempt to show Wendy where he comes from, and why he is the way he is. Wendy appreciates Chuck’s honesty, but doesn’t know if she can make things work with him. She is trying the best way she knows how, but can’t make any promises. You feel for Wendy here. You know she loves Chuck, and doesn’t want to break up her family, but sometimes love isn’t enough. Or maybe it’s just time for Wendy to start to get back to a place where she can love herself.

Taylor is buying an apartment for their parents so that they can have their family close by. This will be good for Doug, as it will keep him near TMC to continue to work on his project, and for Taylor, since they can now start re-building a relationship with their parents. Taylor can’t wait for their Mom to live in NY. This is a side of Taylor we rarely see: wanting to be part of a group, wanting to belong. We’ve seen it to a certain extent in their relationship with Oscar, and with being one of the gang at Axe Cap. But this connection to their parents is important, and for the first time in a while, we see Taylor look happy.

Well, apartments need furniture, so Taylor asks Wendy to go shopping with them. Taylor’s style is not the same as their parents, so Taylor feels Wendy’s eye for knowing how furniture will make people “feel” is what is needed.

Wendy is still on her mission and starts laying the ground work and planting seeds in Taylor’s head. “Are you sure you want them here?” Wendy reminds Taylor that families are not easy (and Wendy would know!) and then plays to Taylor’s logical side by saying it’s not cost neutral. Families cause pain and vulnerability and can become distractions; all things Taylor closes themselves off to. Taylor wants a new start with their parents and is willing to pay that cost, which is exactly what Wendy is hoping to hear.

TMC gets a visit from Bob Beaufort, head of the Bureau of Industry and Security. He has become aware of Doug’s tech and has determined that it has national security implications. The government can seize the tech if it sees fit. A challenge would take years, and in a public hearing, the tech would become public. In lieu of that, the government will pay for all research and development costs to date, and give TMC an 8% premium on their investment in return for a Non-disclosure Agreement. Taylor knows this is all Axe’s doing (and we saw how he made this happen and ewww!). Taylor is in a vise – selling out Doug and giving the government the tech, or going it alone and possibly losing investors in the project and investors at TMC as well. This is precisely where Axe wants Taylor – a lose/lose situation. 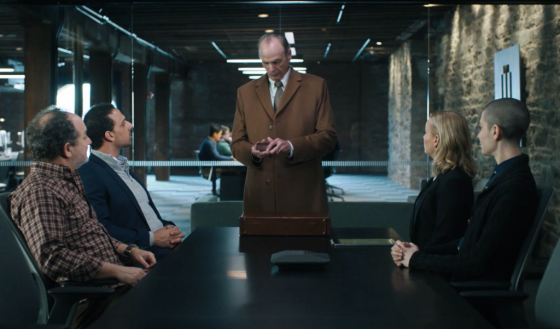