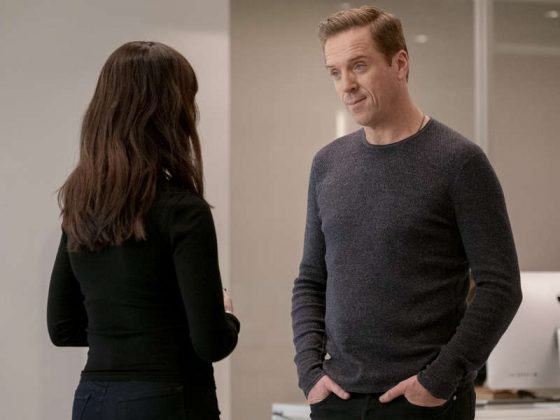 Hello and welcome to the Trader’s Desk. I know I have said this a few times (and we still have two episodes left) but this may be my favorite episode of the season! From the opening, to getting answers to questions I have had for 4 seasons, this was exactly the episode I needed after last week’s break.

I want to break my post down into two parts: quick observations, and then diving into particular moments. I believe certain moments of “New Year’s Day” are pivotal for some of our favorite characters.

I could not think of a better opening sequence than the one we were privileged to get this week. The combination of the wintery scenes of my favorite places in downtown Manhattan, accompanied by the unique voice of Bono from one of my favorite bands, U2, was just simply genius. I have had the pleasure of seeing U2 in concert several times, and all I can say is that there are front men, and then there’s Bono. Taylor buying up shares in the main supplier to Rebecca’s Saler’s stores is a smart move. TMC basically controls the oxygen to the stores now, since Kling Appliances was 63% of Saler’s revenue. Rebecca will try to look for another supplier to buy, but some of the names she mentioned (Samsung, LG) are huge companies. The market cap of Samsung is $272B, and while smaller, the market cap of LG is $4.8B. Neither one are really options for Rebecca, since Saler’s has more debt than cash. It will be very interesting to see how this works, or if Axe can ride to the rescue once again for Rebecca.

Bonnie is now the Axe Cap IR person? This just seems strange. Don’t get me wrong – I love Bonnie, but I truly think she is much better at her Bloomberg trading than out meeting with current and potential clients. Bonnie’s personality is an “acquired” taste, so I’m wondering if this was done to break up her budding relationship with Dollar Bill. As always, Billions doesn’t do things just to do them, so I’m curious to see where this new role takes Bonnie.

Bryan. Oh Bryan! You are going to the dark side, and can’t even see that you are being perfectly played by Chuck. I believe Chuck knows all about the wire taps (why else have Ira in on that meeting?) and is setting you up for a fall! Another example on the show that when you seek revenge, you better dig two graves! The look on Chuck’s face when he sees that Axe is actually there in person and not on Skype to support Wendy and help her with her Medical Board hearing prep was classic Chuck for sure! While Chuck can only give Wendy his morning, Axe cut short his Fiji vacation with his boys to be there for Wendy. This bromance was never going to end well, and while I thought it may break because of just one too many asks by Axe, it will come down to the thing (or person) who has constantly been the source of contention: Wendy. Axe wants to do “what I do” and create some type of leverage over Taylor so that they do not show up to the Medical Board. Without Taylor cooperating, there is no case. Chuck and Ira both shoot down this idea; if the plan doesn’t work, and Taylor takes it to the Medical Board it will certainly make things worse.

And this is the moment we hear the loud audible crack in Team ChAxe :

“None of this would have happened in the first place if you would have done what you were asked!”

Axe doesn’t take failure well, and goes after Chuck as if he were just another employee of Axe Cap! Chuck does not back down, and goes right back after Axe:

“I hardly think I’m to blame on this one, bub! Your gang war resulted in extra bodies!”

Wendy plays referee (again!) and rings the bell by shouting “stop!” The fighters go back to their corners, for now.

Wendy has always been and always will be the grenade pin between Chuck and Axe. In Season 3 (The Third Ortolan), they came together to save Wendy. If Axe thinks Chuck is not trying hard enough to save her this time, it just might cause them to return to the enemies they were always meant to be.

There has been tension between Chuck and Wendy most of this season, and this episode is no different: starting with Chuck only being able to give Wendy part of his day for her inquiry prep, using the low-blow of mentioning her stolen patient notes in the mock inquisition, then telling her to take a deal with the Medical Board that would temporarily suspend her medical license, this couple is very much teetering on edge.

Wendy has been trying to find herself, and is looking for someone to be her “rock”, someone she can trust and rely on. From what she is seeing from Chuck, it’s certainly not him.

The moment that just might seal this couple’s fate is Chuck not being able to pinpoint the exact moment he “needed” (Wendy didn’t ask “wanted”, she asked “needed”, which I think is a bit odd) to marry her. Not only does he not recall (polar opposite from the clarity of Axe!) but he simply walks away. He didn’t even put in any effort to make something up. Once again Maggie Siff emotes the pain and a possible “light-bulb” moment Wendy is having without saying a word. Her performance has been nothing but Emmy worthy this season. Wendy is on a journey to get back to being her best self, but I think she may be doing it without Chuck by her side.

There are several “moments” these two have in this episode where it seems the roles are reversed – Wendy is under pressure and losing her cool, while Axe is the one handing out sage advice.

When Wendy loses her composure during Chuck’s mock questions, Axe takes her for a breather. Wendy is worried that down the road, if she’s considered a “performance coach” and the Axe Cappers are “clients”, she’ll be in the clear with the Medical Board, since there would be no confidentiality to break. But then her sessions with these “clients” can come into play (I’m sure the SEC would have a field day with Dollar Bill’s sessions!) in any kind of investigation of Axe Capital. Perhaps the best thing for Axe, and the firm, is for Wendy to be fired. Even as the words come out of her mouth, we all know Axe is never going to let that happen. For 3 seasons, Axe has needed (and even hunted her down!) Wendy by his side. He will do whatever needs to be done to keep her there. Axe tells Wendy to keep her cool, which is hilarious coming from him! Wendy expresses to Axe how much she appreciates him making her feel “warm and loved and cared for” (something Chuck has not done in quite some time) and how much it means to her that he came back from his vacation for her. I don’t think she even needs to tell him that; the look on her face when Axe walked out onto that perch said it all. Axe is loyal to the people he feels are loyal to him. He is doing what he knows Wendy would and has done for him.

Wendy tells Axe he needs to let everyone he made come into the office on the holiday go home. Axe doesn’t share that concept. His philosophy: if he doesn’t take a day off, neither should his troops (but he was in Fiji – just saying). He needs them to feel “scared to death” of his disapproval, of failing, of not being exactly where they need to be when the boss needs them. Basically, ruling by fear. I think Axe runs on the fear of failing, the fear of everything being taken away, so he just naturally assumes that is the fuel everyone else needs to run on as well. He has set high (some might even think impossible) standards (at least work ethic wise) for himself, and expects everyone else to live up to those same exact standards.

Doc Wendy knows that many Axe Cappers can feed off of that type of energy, but only for a short time. Like star athletes, these employees need time to rest and recover in order to maintain peak performance over the long haul. Axe is still not getting it; he makes it sound as if his employees are his slaves. They are there to do his bidding, to make his money.

‘You are punishing them because they are not you.” It is often said that superstar athletes (think Larry Bird or Wayne Gretzky) don’t make good coaches because they place their high standards and high level of play on their players, who usually don’t live up to a Great One. That is exactly what Axe does to his employees, and almost everyone else in his life.

“What’s the point of being rich if you can’t enjoy it?”