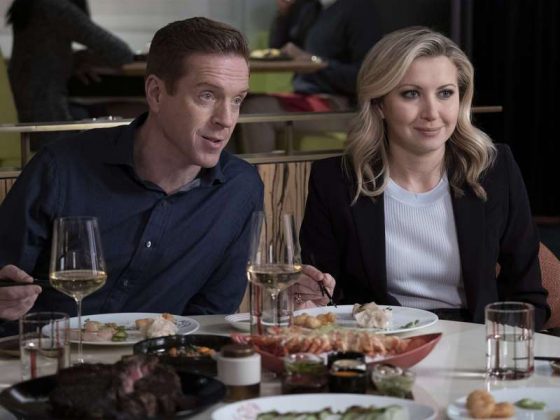 We’re getting closer to the end folks! This penultimate episode of Billions was the perfect set-up for next week’s finale.

Here at the Trader’s Desk, it’s our day job to see patterns, and we saw several parallels to last season’s E11, Kompenso, so let’s discuss! And in keeping with the parallels, I’ve used the same song to start this post as I did last season’s recap of E11 (just a different verse!). I don’t want to break the pattern!

Before I get into my compare and contrast, I can’t do a post without commenting on Wendy. If there is anyone on this show who knows right from wrong, it’s Wendy. I knew she would do the right thing in the end. She knows she was wrong, owns it, and will face the consequences. I think she would have made this decision to come clean to the Medical Board even without Taylor’s input. She has always been the “moral compass” of Billions, and this season she (at least to me) became more human by showing her vulnerable side. She is a strong woman, and her journey this season does not change that. Looking at yourself, and your actions, and recognizing your faults or imperfections is one of the strongest things you can do. This puts her head and shoulders above the men in her life, who will lie, cheat, and basically do whatever they feel is necessary to advance their agenda, and rationalize any and all bad behavior. I look forward to seeing the continuing adventures of Wendy Rhoades, former MD, in Season 5! Last season in E11 it was Comp Day (aka bonus day) at Axe Capital. Axe was in a foul mood since he was begrudgingly giving his employees what they had earned during the year. He was resentful since he felt he was the one who did all “the heavy lifting” and was actually the one who “earns the money”. All he wanted to do was “punch their teeth in”. He meets with every employee and basically makes them sing for their supper. It’s also the day he pushed Taylor over the edge during their comp meeting, which lead to Taylor opening up their own shop. Let’s compare this to Comp Day at TMC.

It’s a very different vibe at TMC on Comp Day. The employees seem happy and Taylor is not going to have individual meetings with each person and force them to “justify their existence”, since the results speak for themselves. Taylor gives everyone some good news: TMC can pay everyone “full freight” (their full bonus), more than anyone has made at their old shops. And then, gives bad news: if they leave their money in the Fund for the next 12 months it’s full freight; if they want their payout now they’ll get only $0.60 to the dollar. Taylor will give everyone time to think about their decision.

I think Taylor does this for two reasons: first, the Fund is relatively new and is still in a war with Axe Cap. Having the capital in-house will come in handy for any further skirmishes. Conserving resources makes sense. Second, seeing who will defer their payout is a way to see who still believes in TMC. Leaving your bonus in the Fund can be risky, but if you have faith in your firm and want to help protect and grow it, it’s a vote of confidence. Now, it’s not like the TMC employees are going to starve. This is only their bonuses, not their salary. Most employees at TMC are pulling down anywhere from $200-250K as an annual salary. Bonuses (which are based on performance and assets under management) are where you make the big bucks.

The TMC employees are not happy with this arrangement, and I get it. They may have left established firms to work at this new shop, and weren’t expecting this as a way of being shown they are appreciated.

Mafee, Lauren and Winston (aka Math Man) are discussing their options regarding their bonuses; should they take the money or keep it in the Fund? Taylor walks into the meeting and wants to know what the issue is. Winston is honest – he thinks this sucks! He believes Taylor is using “hedge fund social pressure” (of which I have never heard of) to stop anyone from taking the upfront, lower payment. He thinks Taylor is giving them a false choice: Taylor could pay the most valuable employees first. Math Man is not done! He also thinks Taylor started TMC because Axe took them for granted (true) and now Taylor is doing the same to them (not true). He knows Taylor needs to keep resources in house because of the war with Axe Cap, but doesn’t want his money to be a part of it. Now he is done, but its Mafee’s turn to speak:

He wants to know why he won’t be loyal to Taylor, who had always had the employees’ back, even when they messed up. Taylor has earned trust and if Winston can’t understand that, then maybe he should do what Taylor did – walk away and prove they can do better! But, Mafee knows Winston is not a leader, he’s a complainer, a grumbler. Mafee is keeping his money with Taylor, so what’s Math Man going to do? Of course he’s going to defer his bonus. Mafee is loyal and unlike Comp Day a year ago at Axe Cap, no one is leaving because they feel unappreciated.

Last season, E11 was the episode where Taylor makes the bold move to open TMC and take Grigor’s money. A year later and Taylor is still making bold moves.

Axe and Rebecca are negotiating to buy Pearlsang Appliances, as a replacement to Kling, which is controlled by TMC. The meeting is going well, but Taylor has Cook (their Hall) follow Axe and Rebecca to the Lobster Club. Taylor now knows that Pearlsang is in play and instructs Cook to “drop what you have on” it. That can only mean bad news for Axe and Rebecca.

And bad news it is. The leak is that Pearlsang uses child slave labor, which now makes it a no go for Rebecca and Axe. Taylor is hoping this is the kill shot for Sayler’s, never expecting Axe would step up to the plate and put Axe Cap at risk to buy another appliance company, Cardinale, for Rebecca. There is only one thing left for Taylor to do. Taylor meets with Rebecca and confesses they were wrong about Axe. Taylor knew they had Rebecca behind the 8 Ball, but never thought Axe would fight so hard for Rebecca and against them. Taylor can’t let Axe buy Cardinale – that would kill Kling. They need to make a deal with Rebecca and Saler’s. Kling will go back to supplying Saler’s with household appliances at the old rates. This proposal would save both Saler’s and Axe.

Rebecca is a deal maker and a tough negotiator. She will need to be in control of Kling and be the decision maker. Another condition: Taylor stays invested in Kling, so that Taylor won’t try and sabotage Saler’s without hurting TMC. Taylor agrees. THIS is how deals are done when you have two rational, smart business people work together. It’s a bold move for Taylor to admit defeat and try and end the war that, in a way, they helped start in S3 E11. However, if Taylor thinks the war is over, they really don’t know Ares, I mean Axe.

“Ares was the Greek God of War and perhaps the most unpopular of all the Olympian gods because of his quick temper, aggressiveness, and unquenchable thirst for conflict.”

The name of my post for S3 E11 Was “Is Axe Ares the God of War?” The answer then as it is now is a resounding Hell Yeah!

To Axe, everyone is a perceived or potential enemy. He “sees every challenge as a life or death contest”. If you don’t tow his line, you are against him. Last season in E11, we finally (but briefly) met Momma Axelrod, and found out that Axe has been this way since he was a kid. His first “enemy” was his Dad and always had to “take the fight” to everyone. He hasn’t stopped fighting since. We see it briefly in his interaction with Chuck in the kitchen of the Lobster Club. Chuck is not following through with his promise to go after Taylor, so Axe must threaten him, just to remind him who’s boss. Rebecca is next in the firing line.