Axe and Chuck are Back on Top…For Now 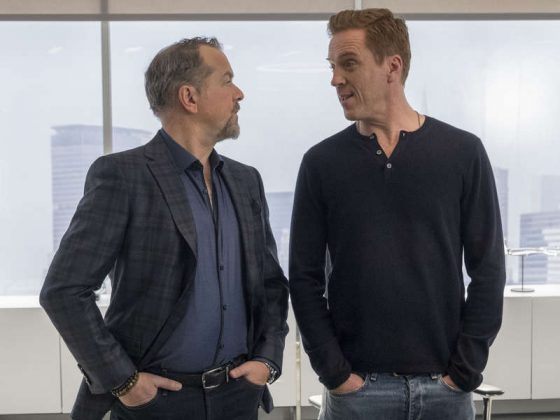 The third season of Billions has essentially been split into two. Everything leading up to last week’s episode involved the indictment of Bobby Axelrod over the Ice Juice sabotage, which ended up roping in Chuck and Wendy Rhoades when Bryan Connerty started to sniff out how his boss was involved in the scheme. Bryan’s always had a nose for justice, but it’s that guiding force that gets him fired in “All The Wilburys.” That’s where the second half comes into play. With the indictment behind them, Chuck, Wendy, and Axe are feeling good about their futures. This is Billions though, and all three of them should know that no play is safe, even when it’s relegated to the past.

Chuck Sr. and Black Jack aren’t there to join the party. Instead, they want to make a point, which is that Chuck can’t be taking these kinds of risks with a third party (the aforementioned dom) present. If he’s going to be Governor, he needs to be discreet. Private liaisons with Wendy as his dom? Go for it! BDSM clubs? Absolutely not. Politics is, after all, for the prudes. Foley lets Chuck know that it’s time to take the next step in their plan, which means that Chuck needs to resign as U.S. Attorney at Southern, and start fundraising and staffing his campaign. Foley, in all of his graciousness, has already secured a meeting with Joe Scolari, the man whom he’s appointed to run the campaign.

Foley makes a fatal mistake though, which is assuming that Chuck will take all of this lying down (no pun intended). We’ll get to that though, as “All The Wilburys” once again executes a twisty, compelling plan that involves a lot of betrayal. Like, a lot. It all begins when Wendy and Chuck get back to their house after the awkward run-in with Foley and Chuck Sr.

Chuck is shaken, both by the encounter and the sudden need to resign from Southern and run from governor. Wendy is shaken too, but for different reasons. She doesn’t want to see her husband become somebody’s puppet. So, she tells Chuck that he’s only ever been happy and passionate and driven at Southern, and that becoming Governor with somebody else pulling the strings isn’t the way to do things. She tells him to shift the power, and do so quickly, and thus begins another incredible plot where Chuck attempts to gain the upper hand.

Billions is a show where shifts in power are constantly taking place. It was just last week that Axe was still worried about going to prison. Now, he’s back at Axe Capital, welcomed with cheers and songs, and Ari awkwardly trying to go all Dead Poets Societyon him. Just as Taylor’s announcing how the quants are starting to pay off, Axe returns and makes some big changes. He wants to clear the board of transactions, start from scratch, and run new deals. That involves killing the quants, too. While Axe thinks everyone will come begging him for trades, Taylor and Wendy are unsure, setting off a power struggle that has the potential to be something special.

Bryan doesn’t get nearly the same reception upon his return to Southern. He’s made to wait around all day in an office that doesn’t have a server connection. He has no idea when Chuck will see him, and it’s not until much later in the day, after many rounds of solitaire, that the two finally meet. Chuck makes it seem like he’s about to give him his new office, but the scene turns quickly. He taunts Bryan in front of the whole office, chastising him for not closing the case and for going against the Rhoades family. He drops a few F-bombs and then fires him, sending Bryan into a world of uncertainty. One thing is clear: Free of a potential indictment, the old Chuck is back in all his glory.

It’s not just Chuck who’s back to his old self. Axe is practically giddy, hopping around the office like a newborn puppy excited by everything in the world. He even takes a meeting with Todd Krakow, a man he doesn’t really like, because of his generous mood. Todd believes he has a massive play on his hands, but his new job as Treasury Secretary prevents him from being seen making such moves. Axe, of course, just got out of the grasp of the government, but he’s listening. Essentially, the E.P.A. is on track to remove some regulations from the natural gas industry, which would open the way for huge profits for those that invest.

While Chuck meets with Scolari to discuss the path to governorship, which involves making up with the mayor of Buffalo, Bob Sweeney, Axe heads out with Taylor, his potential new play from Todd still on his mind. He uses it as leverage against Taylor when they bristle against his plans. He’s trying to buy them a car for a job well done in his absence, but they want a billion dollars of Axe Capital money to use on their own trades, no strings attached.

Axe agrees, and they get the car too, but that’s not the end of their feud. Back at the office, Taylor sees they’re only getting $250 million. Axe promises more may come down the line, but he wants to see how they do with that amount for now. Taylor can’t believe they have to prove themselves at this point. Add in the demolition of their successful quant project, and suddenly Axe has an enemy in his own house. The bad blood isn’t boiling over just yet, but it’s simmering, and the lid is rattling.

Back to Chuck. He goes to Sweeney, the man whose career he derailed, and tries to make amends. Of course, Sweeney has little interest in being a puppet for Jack Foley. Lucky for him, neither does Chuck, and that’s when he makes his move. Chuck tells Sweeney that he wants to use him to shift the power dynamic between himself and Foley. To do so, he wants dirt. He wants to know how to leverage Foley, and there’s a great extended pause in the dialogue while Chuck allows that to sink in and Sweeney contemplates what’s best for him. You can feel the gears working in both men.

Before we get to that final plan though, there’s still a few other power plays to unpack. The first is the saga of Ari Spyros. Axe fires him in a glorious scene where he talks about what it takes to be a Wilbury — as in rock supergroup The Travelling Wilburys — before deciding that Ari is in no way a Wilbury. Then, Ari goes to Dollar Bill on his way out and says he has a foolproof play of his own, one that involves secret information about SEC investigations. That information would allow them to short play companies as needed. Dollar Bill despises Ari, but he sees the truth in his pitch, so he takes him to Axe and the boss agrees to rehire him for the “added value” he’s suddenly bringing to the table.

The most shocking and personal shift in power comes when Lara shows up at the office, outraged that her money is now being charged fees from Axe Capital. As Axe explains, if she wants his firm to handle her money, that service comes with fees, and he’s giving her the best discounted rate he can offer. The whole scene is layered with emotion, both petty and outsized. It’s a firecracker of a scene, their crumbled marriage infecting every part of their lives. Axe may be back, but he’s not exactly happy. He gets Lara to sign an agreement at the discounted rate that also legally forces Lara to keep not only her money at Axe Capital for seven years, but also the kids in the state for that same length of time.

“All The Wilburys” is packed with these kinds of game-changing moves.