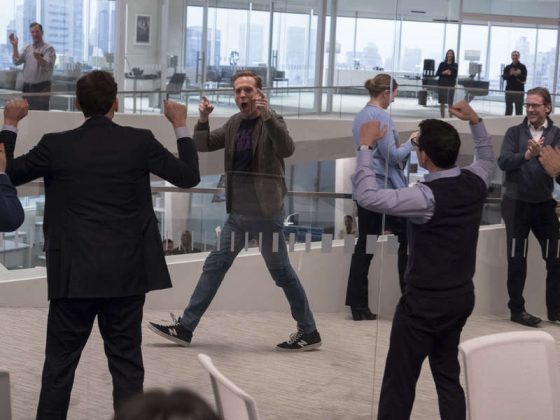 I love a good messy Billions episode as much as the next girl, so it seems churlish to complain that we jammed in a few too many arcs this week. Ideally, however, we really did need two episodes to correctly accommodate all the necessary shenanigans and false flags and power moves that went down. It was too much, and I’m man enough to admit it. Give us a MINUTE to process, guys!

I might have been more forgiving if I had ever really committed to Chuck’s gubernatorial ambitions, I think. It’s never made sense for Chuck to become governor from the show’s perspective; like, no offense to Albany, but there’s a reason we don’t set a lot of prestige and prestige-adjacent dramas there. It’s always just been a matter of when Chuck would decide to stick with the U.S. Attorney’s office (or when it would be decided for him).

I can’t sit here pontificating any longer, we have too much to discuss!

Guys, when Charles Sr. (just a freaking hobgoblin, how he infuriates me!) and Jack Foley materialized to humiliate Chuck and Wendy at their sex dungeon, I almost threw something. There is a TIME and PLACE! We had covered all this last season when Chuck got their domme’s laptop back for Mary-Louise Parker. Jack Foley has known this for ages! Such a misstep, in my opinion: Just a blatantly transparent power play designed to make Chuck know he’s under heel (and not in a fun, sexy way).

As we discover, of course, it’s Wendy who it was a real mistake to pull this shit with. She doesn’t have a lifetime of a bad power dynamics with her dad, she in no way gets off on being treated like dirt, and she is EXTREMELY done with being underestimated by her father-in-law. I’m not sure she even needed to borrow Hall to get her point across to Charles Sr.; she could have trussed him up like a Christmas goose all by herself. When she spits out “You’ll do well to remember who you’re fucking with” at a bathrobe-clad old man, he looks smaller and more vulnerable than we’re used to seeing him. He’s used to pushing his son’s buttons to get a desired outcome, but he hasn’t really internalized that Wendy might have access to a whole new set of Chuck’s buttons which he never will. She’s made a powerful new enemy, as the cliche goes, but he won’t be underestimating her again.

We’ve gotten a bit ahead of ourselves, but that move of Wendy’s comes on the heels of a series of minor humiliations Chuck endures as the limited scope of his freedom as the next governor of New York State becomes increasingly apparent to him. The speed with which he moves to shut down Jack Foley is one of the stranger moments of the episode: when Bob Sweeney gave him the ammo, I assumed that Chuck would be building a careful honeypot trap and biding his time. Foley isn’t some penny-ante mark, he’s a very dangerous man. Whatever Foley’s plan for vengeance, it won’t be pretty.

DeGiulio’s own play, when it happens, is just the sort of necessary plot device we needed to wrap up the gubernatorial arc, and a perfect opening for Wendy to work her own magic on Chuck: Men love compliments, Lord knows, and she managed to beautifully interweave genuine sentiment and brilliantly worded manipulative cues.

Leaving behind the end of Mostly Overwhelmed Albany Chuck, let’s get back to Chuck Who Fuckin Runs The Southern District of New York, and his absolutely brutal public decimation of Bryan Connerty! THE SPITTLE FLEW, my friends! It’s a great scene, it’s hard to watch, and if his goal was to telegraph to the entire state that if you come for Chuck Rhoades, you better finish him… mission accomplished. One of the best moments of the season.

A similar decimation is currently going down over at Axe Capital (Spyros getting his walking papers) but with a less expected result. I think I speak for all of us when I say that the new buddy comedy potential of Spyros and Dollar Bill working in concert for evil and profit is TANTALIZING. It’s a strange-bedfellows time in general, with Todd Krakow’s natural gas play in the game. For now Axe is minting money off it, but, you know, it’s Todd Krakow.

I had been concerned that Axe was going to keep slowly alienating Taylor in the wake of “Okay, great job, unwind all our positions and shut down your quant… thing…” So having them get their own book (and a car) did a lot to assuage my fears on that front, even if Axe has them on a much shorter leash than he let it sound originally.