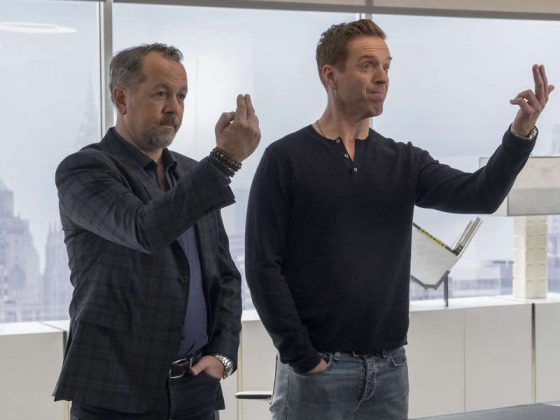 The dust has settled, but “Billions” has not. After last week’s tour de force put an end to two and a half seasons’ worth of warfare between Bobby Axelrod and Chuck Rhoades, you might expect the show to settle into what remains of its status quo: Chuck’s run for governor, for example, or Bobby’s relatively cautious relationship with his company. But by the time the closing credits roll on this week’s episode, all that has been torn to pieces too.

Written by two of the show’s creators, Brian Koppelman and David Levien, and directed with minimal flash by Mike Binder, this week’s installment tosses the seven-dimensional chessboard out the window in favor of a series of direct confrontations. Characters get together, face off, and verbally pound away at one another until only the strongest remain standing. No room for stealth mode here: It’s vulgar displays of power all the way down.

Now that Chuck, Bobby and Wendy have won, are they going to press their advantages against their rivals? To continue my “Breaking Bad” comparison from last week, “You’re goddamn right,” as Walter White would say.

The blowup between Chuck and his one-time protégé Bryan Connerty makes for an instructive example, not least because it’s not really a blowup between them at all. After the dismissal of his case against Bobby Axelrod and the disintegration of his related investigation into Chuck and Wendy, Bryan has been bounced back to the Southern District, under the command of the man who was once his mentor — but who became, until very recently, his quarry. Bryan spends a day or two in “Siberia,” as he puts it, playing solitaire in an empty office with no internet connection. His ex-girlfriend and colleague Kate Sacker, with whom he collided during the Bobby-Chuck debacle, won’t even speak to him. When Rhoades finally comes to see him, praising his tenacity and whisking him out of isolation to find “an office that befits,” Connerty clearly believes that bygones are bygones.

He’s wrong. In a tirade that allows Paul Giamatti go the full “I am not drinking any [expletive] merlot” monty, Chuck unleashes all his rage — and a not insignificant amount of spittle — at his defeated rival. Bryan may have learned a lot of things from him, Chuck says, but he “didn’t learn the lesson that matters most: You didn’t win.” Rhoades rattles off the personal affronts Connerty committed, up to and including having threatened to destroy Chuck’s family.

“How could you think there’s a universe where you could survive that?” he asks rhetorically, before firing Connerty at maximum volume. He even stages the execution in the center of the office, in full view of everyone, increasing the humiliation. Bryan knows when he’s beaten, and he weathers the blows without a word. (Toby Leonard Moore really deserves a special Emmy for enduring indignity; as Connerty, his silent grimaces speak volumes.)

This is but one of the many “smackdowns,” as young Gordie Axelrod puts it, that fill out the episode like a WWE wrestling card. Gordie borrowed that word from his mother Lara, who engages in several emotionally brutalizing arguments after having stayed on the sidelines for much of the recent action. She is furious with Bobby for charging fees on the trades he has agreed to keep making with her half of their divorce settlement. And she is furious with Wendy for counseling Gordie when the poor kid wanders into her office.

She is even furious when Bobby agrees to lower the fee in exchange for a seven-year “lockdown” that will keep her money in his hands and their kids in the New York City area: Anticipating her bargaining position, he has already prepared a contract including the percentage he knew she would demand, not even bothering to hide his sense of superiority as a negotiator. If Chuck’s battle mode feels like a charging bull, the tight delivery and lean physicality of the actors Damian Lewis and Malin Akerman makes their arguments feel like knife fights — piercing, precise, and personal.

Now that Bobby is allowed to trade again, he quickly reasserts control over Axe Cap, demanding that the company’s chief investment officer and interim leader, Taylor Mason, wipe the company’s investment slate clean so that he can start fresh with his own ideas. Those include demanding that Taylor fire the quants, the mathematical brainiacs making trades based on algorithms that Taylor helped set up. (Asking them to personally tear down the paper covering their windows is an astutely humiliating late-capitalist touch.) They also include keeping a tight rein on the $1 billion in hands-off money that Taylor requests as a condition of staying onboard — such that it really isn’t hands-off at all.

If you suspect that Bobby is partly motivated by insecurity over how well Taylor did in his absence, their final scene together, in which they both linger late at the office suggests you’re on the right track. In Bobby’s case (and perhaps in Taylor’s), the goal is merely to claim bragging rights for having been the last to leave, even if it means bailing on his kids.

The ugliness at Axe Cap takes on a more comedic tinge when the time comes for Bobby to bury the ax in Ari Spyros, the perpetually out-of-sync compliance chief who ratted out Wendy and led everyone to the brink of disaster. Spyros’s dialogue is a constant cringe-inducing string of try-hard quotes and references, aiming to match the effortless pop-culture machismo of his colleagues and always falling shy of the mark — whether he’s climbing onto the conference-room table to recite “O Captain! My Captain!” or cooing, “I sense a disturbance in the Force,” with a bad English accent. Informing Ari that he lacks the combination of “wit, cool, and credibility” that Bob Dylan and Tom Petty searched for as they assembled their supergroup, the Traveling Wilburys, they send him packing.

Dollar Bill, of all people, is his unlikely savior, bringing him back on board when Ari offers inside information on S.E.C. investigations that could help them make a killing based on which companies will and won’t face eventual indictment. (Axe makes an inside deal with the similarly wormy treasury secretary, Todd Krakow, who tips him off about an E.P.A. ruling that will cut natural gas regulations.) “Handle me with care!” Spyros exclaims upon his rehiring, desperate to prove with a Wilburys reference that he is Wilburys material — and thereby demonstrating that he’s anything but.

Yet Chuck and Wendy are the real supergroup taking the stage this week. When the sadomasochistic dungeon they frequent is compromised by Chuck’s father and by his political patron Black Jack Foley (boy, oh boy, do those tweedy types look out of place among the leather bondage masks), Chuck chafes at the idea of a life under Foley’s thumb.