John Malkovich is an ‘Icebreaker’ and Stephen Kunken Talks Spyros 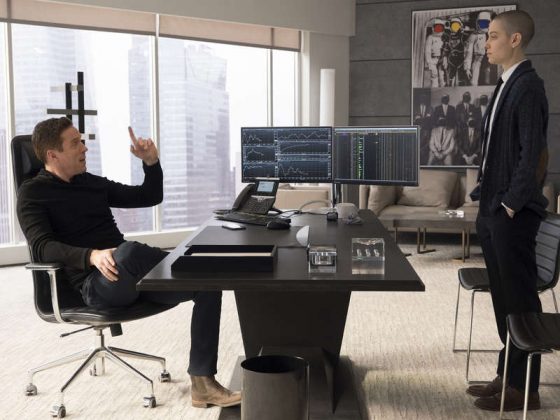 The third season of ‘Billions’ continues to get better with each passing episode. The show is no longer centered around the cat and mouse game between Chuck (Paul Giamatti) and Axe (Damian Lewis). Tectonic shifts in plot, wavering loyalties and ever-evolving power plays are doing as intended, keeping fans on the edge of their seats week after week. As Showtime’s No. 2 drama series, Billions averages 4.5-to-5 million weekly viewers across platforms.

And, the show’s viewership has grown season-over-season. Throughout season two, the series grew on Sunday nights by more than 35% from premiere-to-finale. And, the season three premiere was the show’s highest-rated ever with the March 25 debut up 23% from last year. A fourth season is in the works and seeds are planted in this episode that can definitely lead to very exciting storylines next year.

Chuck Has His Hands Tied:

As always, Billions is layered in symbolism, as exemplified brilliantly in the opening scene. Waylon ‘Jock’ Jeffcoat (Clancy Brown) takes Chuck on a coyote killing mission in West Texas. He explains to Chuck that the coyotes have been killing off his calves. The message is rather clear: kill what gets in your way. Whether the killing is literal or figurative, it’s been a consistent theme throughout the show in a very effective survival of the fittest sort of way.

To Chuck, actual killing isn’t his preferred method, but lessons from his father remain within. “Once you have the animal in your sights, breathe easy and let fly,” he says, after making a clean shot. A man has to do what a man has to do. Chuck is reminded that the trial of Jose Lugo, the innocent prisoner beaten by guards, is starting and he’s instructed  to ensure he gets the same treatment as the predator just killed.

Chuck and Kate Sacker (Condola Rashad) each grapple with their conscience regarding the case as they know the assignment is to take an already beaten innocent man down. Neither can stomach the thought but they’re more than aware of what is expected of them. “I will use all at my disposal to win,” she says. “This is the first time in my career where I will be walking into a courtroom hoping I lose because whatever I say in there will not be true.” Both know the truth: Lugo killed the guard in self-defense.

Sacker is devastated when she learns the defendant died on his way to court. She tells Chuck the guards are claiming he tried to make a run for it and they subdued him. In the process, he died from his injuries, which included a severed spinal cord. He was murdered before the trial could begin. She points out that his hands were chained. Chuck promises her they will seek justice against those guards but it’s of little consolation to her. She attempts to speak with Connerty (Toby Leonard Moore) in the hopes he can relate to her, but he’s not interested in a conversation. He’s moving forward in a new direction, aiming to get a job with the FBI.

Axe Gets Entangled With A Ruthless Russian Oligarch:

Axe makes a bold play to secure capital from a controversial source and in so doing, takes one of his biggest risks yet. As Axe told his employees in last week’s episode, he’s planning a massive and unprecedented cap raise of $20 billion within a record time of just six months. He targets and gets into business with a Russian oligarch whose ruthless reputation precedes him, Grigor Andolov, played by John Malkovich. Though conflicted, Axe’s need to relaunch comes before any fears. Wags (David Costabile) understands his needs for an “icebreaker” and as he says, “first money in gets the party started and entices other investors.”

Taylor (Asia Kate Dillon) infuriates Axe by suggesting a risky undertaking in a meeting with one of Andolov’s people. Taylor proposes the concept of launching an entirely new strategy: Axe Cap’s first foray into impact investing, also referred to as socially conscious ownership, which would include environmental, social and government (ESG) investments. Axe accuses Taylor of purposely tanking the meeting by pitching enviro to an oil oligarch, an idea Taylor knew would be found repulsive. “I think international criminals are unstable bedrock for a cap raise,” Taylor admits. The two are on opposite sides and the tension between them is boiling over. In an effort to better understand Axe, Taylor seeks advice from Wags.

Also in this episode, Dollar Bill (Kelly AuCoin) raises hell when his lucky dollar is mysteriously missing, and he doesn’t stop until he finds the culprit, which turns out to be Rudy (Chris Carfizzi). His aim was to throw Dollar Bill off his game. And, Wendy (Maggie Siff) sells the Maserati Axe gave her and donates $250,000 to the foundation in an attempt to allay her guilt.