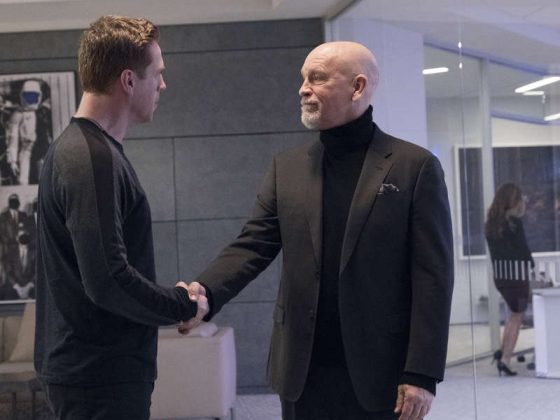 You can take the boys out of the blood feud, but you can’t take the blood feud out of the boys. Just two episodes after the successful conclusion of the truce that saw the main men of “Billions” call an end to hostilities and help each other out of potentially career-ending legal trouble, both Bobby Axelrod and Chuck Rhoades have launched dangerous new contests of the will. And this time around, it’s not the courtroom versus the boardroom: Each man has entered into a rivalry with a bigger fish in their own professional pond.

For Chuck, this means setting his sights on a new white whale: Attorney General Jock Jeffcoat, the Alamo authoritarian running the Justice Department. For Bobby, it entails entering an alliance of creepy convenience with Grigor Andolov, a cheerfully violent Russian oil baron, whose bottomless reserves of liquid cash are exceeded only by his well-earned reputation for criminality and cruelty. Together, writers Adam R. Perlman and Willie Reale and director Stacie Passon operate this week’s episode, titled “Icebreaker,” like a factory assembly line, cranking out perfect new foils for two characters who are never complete without conflict.

The process begins with great casting. The strengths of Clancy Brown as General Jeffcoat (you can tell his character savors the title the way he does the flavor of a fine cigar) have been apparent from the season premiere. He’s got a hickory-smoked voice that is perfect for delivering the writers’ Southern variant on their usual macho-existentialist dialogue, turning every scene — whether he’s on a hunting expedition on his West Texas ranch or sipping drinks at the Yale Club — into a teachable moment about predator and prey.

But Jeffcoat can convincingly dispense with the genteel facade when necessary, telling Chuck and his dismayed lieutenant Kate Sacker that the prison guards who summarily executed the young prisoner he’d forced them to prosecute will go unpunished because, quite simply, “All lives are not equal.” And he’s a big man, too, with big features to match — a monster heel who could lurch into vicious action against babyfaces like Sacker and Rhoades at a moment’s notice. When Wendy senses Chuck’s profound loathing of the man following a disastrous dinner with his former associate Lonnie Watley (Malachi Weir, making a welcome return) in which Rhoades vented all his frustration, she pulls no punches as to the next move he should make: “You have to [expletive] assassinate him.” Nothing less than total destruction will do.

This is an approach that would suit Bobby’s new partner Andolov to a tee. Played by John Malkovich with his customary laconic weirdness, he spends most of the episode playing hard to get, forcing Axe to prove that he has the political power and mental fortitude to withstand the scrutiny such an alliance will bring. (“Not a great time to be back-channeling with the Russians now,” Bobby says at one point, a clear allusion to our recent unpleasantness.) This requires sidelining his own chief investment officer after Taylor deliberately tanks a pitch meeting in hopes of preventing the alliance; arranging a meet-up with the magnificently venal treasury secretary, Todd Krakow (Danny Strong, who doesn’t so much speak his sleazy dialogue as allow it to ooze out of his smirking mouth); and repeatedly threatening to withdraw from the deal himself as a show of strength.

As a sort of reward, the Russian tells Axe the story of a poor boy who once begged him for a sip of wine at a Christmas fair. When Andolov got a look at the kid’s well-fed mother, he realized the boy wasn’t poor at all, just “greedy.” The punishment he doles out to the woman beggars “Game of Thrones” for sexual brutality.

“Do you know what happened to him?” Andolov asks Bobby about the boy. Axe says no, but the grim punch line is that neither does Andolov, nor anyone else. After the story is over, Andolov stretches his hands outward and smiles faux-sheepishly, as if the fitting conclusion to be drawn from raping a woman and orphaning her child is “Ain’t I a stinker?” This is a man who will destroy people’s lives on a whim and leave them to the wolves — or the coyotes, as Jeffcoat might put it.

It’s enough to leave you as skeptical as Taylor is when Wags insists, repeatedly, that Axe is always right. There’s a first time for everything, including Axe’s not being the smartest sociopath in the room.

From Russian influence-peddling to injustice at Justice, the episode’s politics are so clear that the fiction is barely a fig leaf. But art needn’t be subtle to also be smart. As the more astute analyses of the Russia story have pointed out, the corruption allegedly engineered by a rogues’ gallery of Russian politicians, businessmen, intelligence agents and cybercriminals would not be possible without a ready-made architecture of American graft waiting for them to exploit. Andolov may be more openly gangsterish than Axelrod, but that’s a difference in degree, not in kind.

Moreover, Secretary Krakow’s openly greasable palm, General Jeffcoat’s Blue Lives Matter-branded jackboots, and even the guards who crushed the spine of a man at their mercy are all backed by the full faith and credit of the same United States government. “Billions” has no time for fantasies of foreign subversion; the barbarians have been inside the gates since the pilot.