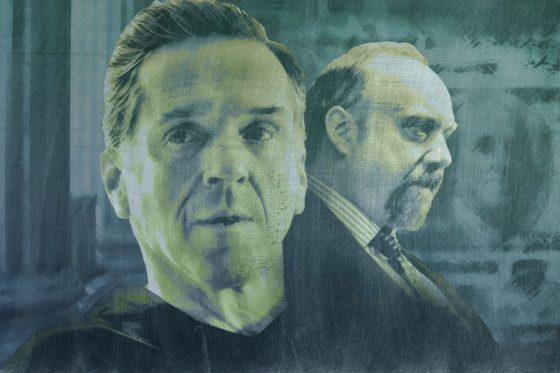 In an economic era increasingly defined by tax avoidance, inequality and constant disruption, it seems unlikely that financial web-spinners in expensive suits would become the poster children of TV’s most popular dramas.

And yet the success of shows including Billions, about the exploits of scheming billionaire Bobby Axelrod, Black Monday, which chronicled the preamble to the 1998 stock market collapse, and Devils, about key players in an investment bank tied to the 2008 financial crisis, speaks for itself.

The success of finance world dramas is borne out of the suspicion which naturally surrounds the personalities who sit at the centre of it, says actor Damian Lewis, who plays Bobby Axelrod in Billions. That show consciously borrows from the headlines, particularly the high-profile investigations led by former New York attorney Preet Bharara.

“There is greater suspicion about billionaires and about wealth and accumulation of wealth, because people are asking for the first time, excuse me, how did you become a billionaire exactly, because I just lost my house?” Lewis says.

“That’s an interesting transitional point [but] having said that, I think there will always remain a certain rock and roll element to the guy with the money and the fast car and I think that is more prevalent here [in the United States].”

There is also a moral ambivalence to anti-heroes such as Bobby Axelrod, who is presented both as a character who is uncharitably ruthless, but at the same time, generous when it comes to charitable causes. That makes them both complex and appealing, Lewis says.

“I think a dramatic device that is being used here is that if you give people enough need, desire, want, viewers enjoy that, viewers enjoy that embodied in the lead characters and we enjoy watching the desperation, the compromise, and the ambiguity that that throws up in their lives,” Lewis says. “That’s where the dramatic stakes are. The fact that shysters do shystery things doesn’t make you like them less, weirdly, within a dramatic context.”

“We talk a lot about having the edge in this show [and] the edge is clearly euphemistic when we talk about having the edge,” Lewis adds. “The guys who I met all talked about being risk averse, meaning you have enough information to mitigate against all risk before you make your bet. If he is attractive at the same time as being reprehensible, I think that’s down to the skill of these guys.”

Lewis believes the genre has flourished because of the heightened storytelling it uses, but also the moral ambiguity of the key characters. Instead of making a presumption of good or evil, the storytelling leaves the audience with uncertainty.

“It’s not stylised but it’s heightened, and everybody speaks in these long sentences,” Lewis says. “It’s a little bit like Hamlet. They tend to speak in soliloquies, they sort of wonder [whether they will take a particular action] and they share it with someone else. There is a Shakespearian quality to it in the way they communicate.”

“Even though the show occupies a moral grey ground, good people are doing bad things, and bad people are doing good things, but at the same time you get the sense that there’s good and there’s bad, and they exist as entities in themselves, and these guys will sort of negotiate themselves back and forth between them,” he says.

Another key element, according to Billions producer Brian Koppelman, is the audience’s perspective on the intersection of class, power and privilege.

“We can all understand, if not excuse, many crimes committed by people in desperate places,” Koppelman says.