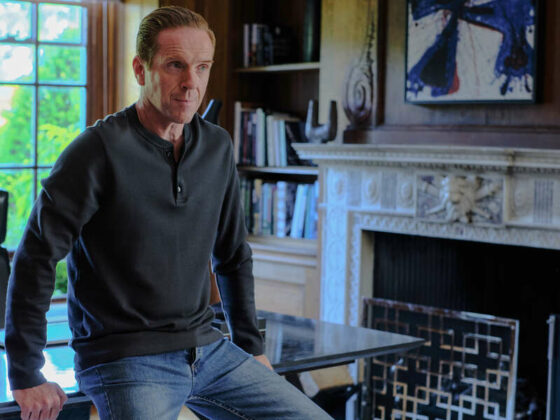 Two episodes ago, I wrote about how Axe opened himself up to massive vulnerability by allowing emotion to guide all of his decisions. This is exactly how Chuck, Taylor, and Mike Prince claim their “victory smoke” in tonight’s episode.

But what makes the final moments of “Victory Smoke” a true cliffhanger isn’t the revelation that Axe has been utterly played by Chuck & Co. and is 24 hours away from arrest. It is how he hesitates to execute his escape plan, which, I can only assume, is to flee the country (something he’s had in place since season one). He doesn’t even need to say why — one lock of the eyes with Wendy over Zoom (yep, Axe is still “in quarantine,” with Damian Lewis again only appearing in this episode either solo or via video chat) tells us everything we needed to know: He’s willing to risk imprisonment for luuurrrvvve.

And in case the blink-and-you’ll-miss-it silent gaze is too understated, not to worry. Just take another listen to the Rolling Stones’ “Wild Horses,” which soundtracks the scene. The lyrics are about as subtle as a sledgehammer.

Chuck and his team have finally broken Axe’s hot streak, but not without grave cost, as with everything on Billions. For the sake of a “greater good,” Prince alienates his daughters (Molly Brown and Gracie Lawrence), Kate Sacker orchestrates her father’s arrest, and Taylor allows Wags and his goons to censure Mase Carb to near-oblivion. Oh, and Chuck manipulated his father’s ego.

That last example sounds pretty weak considering this is Senior we’re talking about. While “Victory Smoke” establishes that Senior is more on Team Senior than Team Chuck or Team Axe, Chuck using his ruthless dad as a pawn to get the probations on Axe Bank lifted isn’t exactly going to have a permanent effect on their relationship. I can’t say the same for Prince and his children or Sacker and her father. If anything, Chuck’s biggest loss this episode is relinquishing all criminal jurisdiction to Manhattan District Attorney Mary Ann Gramm after she deduced last week’s Jeffersonian Dinner (she was one of the remote attendees) was part of an elaborate setup. Just so he could be granted the power to arrest one legal cannabis CEO.

Still, this is an impressive plan, even by Billions’ standards, with every step requiring precise execution. Axe’s big goal of the episode is to make Axe Bank solvent — hence the distribution of Glengarry-worthy Punch Cigars to be sparked only once achieved. Prince, predicting that Axe will spy on his own new digital bank (which he does, through Hall), enlists his restless-one-percent Gen-Z daughters to win over the Gen-X owner of a legal weed company with their youthful know-how and, I’m guessing, their affinity for ’90s nostalgia: The owner, Dawn Winslow, is played by Janeane Garofalo, and the name of her business is Fine Young Cannabis (FYC).

Next thing we know, Wags is wining and dining Sacker’s media-mogul dad, Franklin, promising enough funding for his congressional candidate daughter to “bury” all of her opponents” in exchange for a little “relaxing” of his networks’ advertising regulations, like allowing for marijuana commercials. A new deal is presented to Winslow, sweetened with a single-copy press of Wu-Tang Clan’s Once Upon a Time in Shaolin (Garofalo’s character is a former music producer). If she deposits her money with Axe Bank, he’ll provide something Liz and Gail Prince can’t: Mainstream-media advertising. It’s an offer too good to pass up, so Winslow ditches Prince’s bank.

But this dream deal falls through as quickly as it is arranged because Sacker is unwilling to let her father, who’s on the Axe Bank board, go down on federal charges. To save Franklin, Sacker goes behind Chuck’s back and hands over evidence of her dad’s minor criminal behavior to Mary Ann Gramm. With Franklin briefly out of the picture, Axe can no longer offer Winslow that attractive media deal.

The next part of the plan coincides with Taylor’s first appearance at about the halfway mark of the episode. I’m still confused about how exactly Taylor’s self-implosion connects to the bigger picture, but I’m sure all will be revealed next week. After conferring with Chuck, Taylor welcomes Lawrence Boyd (Eric Bogosian) into their apartment. Boyd, who hasn’t been seen on Billions since season three, played a key role in Axe’s Ice Juice arrest. Taylor pitches Boyd the idea of screwing Axe over by stealing FYC out from under him, and the former Spartan Ives CEO is more than game.

While the head of Mase Carb is meeting with a major Axe enemy, Rian (Eva Victor) is casually “offloading” this intel to Wendy because she noticed it on Taylor’s calendar. I mean, when you find out your direct supervisor is meeting with a rival and giving said rival opposite advice than what they gave Axe, wouldn’t you feel “seriously awk” — as in “ward” — too? But there was one thing Rian didn’t offload to Wendy: That she was working with Taylor all along and purposely blew the whistle on them.

Wendy informs Wags of Taylor’s latest betrayal. He places the aforementioned censures on Mase Carb and returns to Winslow with a brand-new offer: Another exquisite financial deal and ownership of Axe’s country house. Remember what I said earlier about precision timing? The combination of Axe’s direct pressure and exhaustion from the nonstop wheeling and dealing forces Winslow’s hand. She signs with Axe, and soon enough, stacks of cash are loaded into armored Axe Bank trucks. That night, Axe suddenly appears on the Axe Cap office TVs, Big Brother style, ordering his staff to light up their cigars.

Over at the New York state AG’s office, Taylor, Sacker, Chuck, and Prince are also celebrating a victory: Winslow is about to be arrested for running a criminal enterprise side hustle and will likely flip on Axe once she’s in cuffs. The big reveal here is that Sacker knew FYC was a dirty business from the start, making it the ideal company for Chuck and Prince’s sophisticated entrapment scheme.

As soon as the news breaks about Winslow’s arrest for criminal drug trafficking, the cigars are doused, and Axe runs through his options with Wags, Hall, Wendy, and his lawyer, Orrin Bach (Glenn Fleshler). I’m no law expert, but when your attorney offers “police custody” or “skip town” as your only choices, I am not uncertain that you’re screwed.