Both interviews are worth a listen! He was also on the SiriusXM show Geektime again which replays on Saturday at 2pm, Sunday at 5pm, and Monday at 7am (Eastern) and can be listed to online via SiriusXM’s free trial. 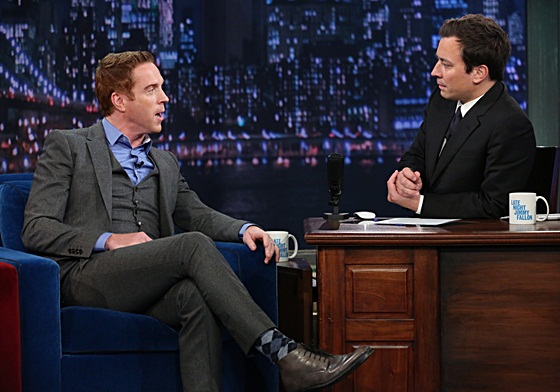 Damian Lewis made guest appearances on SiriusXM Radio’s The Covino and Rich Show and on Late Night with Jimmy Fallon on Thursday. Click below for pictures including hi-res stills from Jimmy Fallon.

Damian Lewis’s interview with BBC Radio 4’s Front Row broadcast on Tuesday. Click here at the BBC website to listen to it online. For an mp3 download, click here at the media archive. Read excerpts from the interview in the BBC article below.

Speaking to Radio 4’s Front Row, the British actor said he was aware of the risk when he first began acting and never revealed the detail.

“It was really to avoid any typecasting in a floppy-fringed, public schoolboy kind of way,” he said.

By not looking the stereotypical part, Lewis went on, he had a greater variety of roles open to him.

“My experience of boarding school was that I wasn’t the handsome Rupert Everett type,” the 41-year-old said. “I was the slightly too red and pale, funny one.”

Once he had played a range of roles and felt confident to talk about attending Eton, the actor found “it was the first line of every print interview” he did.

“I thought, ‘There you go, I’m vindicated,’ and there was every reason not to talk about it,” he said.

His comments come after Sherlock star Benedict Cumberbatch complained he was fed up with being attacked over his private school education.

In contrast, Lewis said, he had generally not experienced much “posh-bashing”.

“It’s probably partly to do with the success I’ve had in America that people don’t identify me too strongly with it in its context,” he said.

“When they want to they will, and when they don’t need to they don’t, so I don’t mind too much.”

Lewis will soon be seen in a film version of The Sweeney, alongside Ray Winstone and Ben “Plan B” Drew.

The full interview can be heard of Radio 4’s Front Row on Tuesday at 19:15 BST. 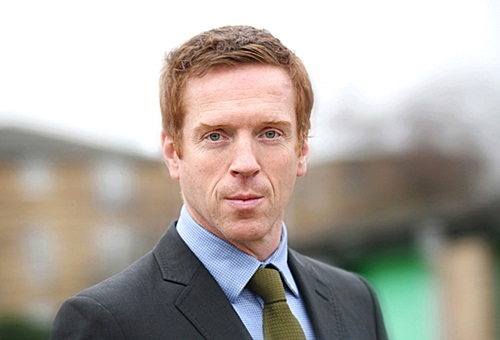 All 4 episodes of the latest BBC Radio 4 drama Number 10 are currently available for listening online on the BBC website. Here’s a review from Radio Drama Reviews Online:

This series of four political plays had just about everything in it: satire, drama, conflict, humour, plus a liberal dose of cynicism about politicians – irrespective of their persuasions.

Each play touched on issues of paramount importance to the contemporary world – the pernicious influence of capitalism, media ownership, the power of the hypermarkets, overseas ‘development,’ computer hacking, street demonstrations and devolution.

Sometimes the satire was reminiscent of political comedies of previous eras: The New Statesman and The Thick of It sprung to mind as I listened to the perpetual bickering between Prime Minister Simon Laity (Damian Lewis) and his various political minions including loud-mouthed Aussie Nathan Loltzn (Mike Sengelow), Georgie (Gina McKee), Connie (Stella Gonet) and oleaginous elder statesperson Sir Hugo (Julian Glover). One member of staff, Amjad Hernmati (Arsher Ali) tried to sustain his integrity, but found himself under pressure to ‘revise’ his judgments in the interests of ‘good’ government (a nicely euphemistic phrase which basically meant suppressing any democratic initiatives, designed to reduce the power of large capitalist organizations and prioritize the rights of the individual).

On the other hand the series did not ignore the human element, as it focused on Simon’s relationship with his partner Alan (John Hollingworth), whose apparently erratic behaviour concealed a secret that would change both men’s lives. 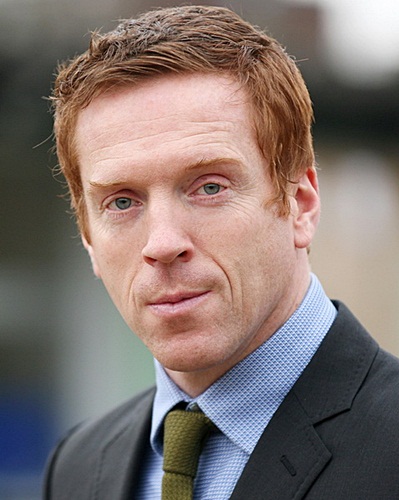 A new 4-part series of the BBC radio drama Number 10 will broadcast this week Monday-Thursday from 2.15-3.00pm on BBC Radio 4. Damian Lewis again reprises his role as PM Simon Laity. The episodes will be made available to listen to at the BBC website for 7 days after broadcast. Update: You can now download the first episode here from the Media archive.

Here’s a short review of the series from the Radio Times:

The Scottish parliament has legalised assisted suicide and a couple en route to the Dignitas clinic in Glasgow have been arrested in Northumberland; the Crown Prince of West Tuvalonga is posing a diplomatic problem after being apparently snubbed by Simon’s partner Alan at a state dinner; and the chief strategist is promoting an MP’s idea for an international six-day week.

Myerson keeps all the plates of the various plot lines spinning successfully, striking a fine balance between the absurd, the tragicomic and the serious, and interjecting a few telling gags from time to time. A blunder caught on a still open mic remind you of anyone? 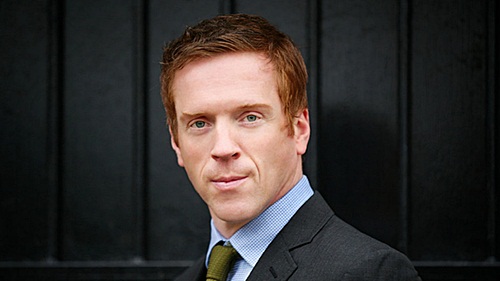 A new series of the BBC radio drama Number 10 will broadcast Monday-Thursday, February 20-23 from 2.15-3.00pm on BBC Radio 4. Damian Lewis will reprise his role as Prime Minister Simon Laity. For downloads of the two previous series, visit our Media archive here.

The first episode sees Scotland legalising assisted dying and a couple arrested in Northumberland on their way to the new Dignitas Clinic in Glasgow.

The politicians know this is potentially a way to promote Scottish independence but it still leaves Simon Laity, PM, with the bad press from a terminally-ill man in custody.The team want him to consider assisted dying legislation in England, but he flatly refuses – for him it is a moral issue and an uncrossable line.

The Crown Prince of West Tuvalonga, in the UK to sign a massive oil exploration deal, is angry as well – apparently snubbed the night before by Simon’s partner Alan, who seemed worse for wear at the state dinner.

Meanwhile, to win wavering votes, the PM’s strategist is promoting a reform to the international calendar – he wants a six-day week, abolishing Tuesdays. Simon is unwilling to confront Alan about his drinking, but when he finally doeshe gets a horrible surprise – Alan has been diagnosed with Motor Neurone Disease. But he insists it remain their secret for as long as possible.

The second play sees a routine eviction blowing up into a full scale riot, playing into the hands of an e-petition in favour of capital punishment. But when the opposition promote it for a debate in the House, Simon feels he has to come down hard on police violence.

The third play finds the PM preparing to deliver his speech to the Party Conference in Brighton. But with just 11 hours to go, the speech isn’t even written yet.

In the final play in the series, Alan’s health is rapidly deteriorating and Simon is still struggling to find time to spend with him. Now wheelchair-bound, Alan starts talking about the Dignitas clinic in Glasgow – and when he disappears Simon assumes the worst and makes a decision that shocks the cabinet.